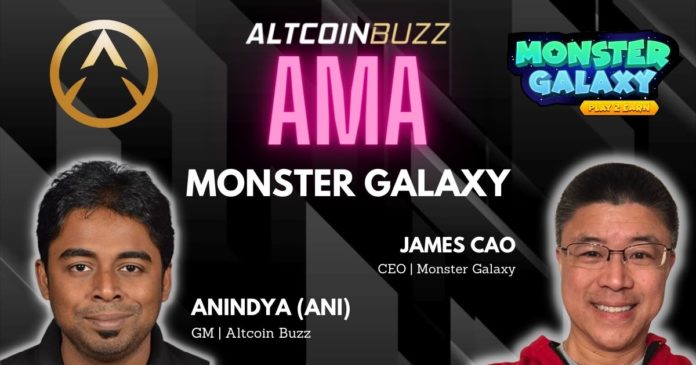 The General Manager of Altcoin Buzz, Anindya (Ani) Baidya, anchored the Monster Galaxy AMA session on our Telegram channel with James Cao, the CEO of Monster Galaxy. Besides, the AMA took place on January 4th, 2022.

Below is a recap of the AMA session with James Cao to understand the game. The AMA was also in three segments: introduction, deep dive, and community questions and answers.

Q – The History of Monster Galaxy goes a long way back. Tell us a bit about your journey and how you got interested in blockchain?

I’m James Cao, CEO of Gaia Online and Monster Galaxy. Glad to meet you all. I co-founded GaiaOnline in 2003. It’s been 18 years. Gaia has become one of the leading virtual worlds and anime communities in the US and Canada.

MONSTER GALAXY is a hit IP from Gaia Online. We have released three games already and were played by over 25M users.

I have been exploring the best way to develop the next Monster Galaxy game, and P2E will be the next chapter with the NFT and P2E model integrated. NFT allows users to own their beloved pets to collect and trade, finance, and bring pets to all our future games.

The game is a Pokémon look-alike monster collect and battle game. We will release the beta version in Feb 2022 and launch the official version in March 2022.

Along the way, we are also releasing new chapters for our comic book every week, following tradition from our previous games.

Please follow our Twitter @monstergalaxy21 to check out the new story of the new Monster Galaxy P2E game.

Q – Tell us, how did you find blockchain, and when did it tell you that this is the direction you want to take?

We have released three Monster Galaxy games already. There are two specific challenges we see and would like to solve.

One is how to make users keep the beloved moga forever. Thousands of users spent tons of time and money holding their mogas and would love to keep them forever.

The second is how to trade the mogas even when the game is no longer there. NFT solves these two problems.

I genuinely believe NFT and P2E are the game changers to the gaming industry. We want to be the pioneer.

Q – Tell us a bit about your team. Where is the team based out of? How many people do you have on the team?

We are US based company. Most of the team members are based in San Jose, California. Most team members have been in the gaming industry for more than ten years.

Our previous users are mainly in the US, Canada, and Southeast Asia. Besides game developers, I’m proud that we have a solid artist team. The team is famous for cute monsters.

We also have great storytelling and comic team, and please check out our comics on Twitter. We also work with famous movie music composers to enrich the game. Currently, we have ten full-time employees and 15 contractors.

Q – Tell us more about your storyline and gameplay experience.

First of all, Monster Galaxy is a hit IP made by GaiaOnline with millions of fans worldwide.

The story goes like this: In a land populated by Moga creatures, skilled tamers capture these Moga in Starseeds and pit them against each other in battle. Avery and Down want to be professional moga tamers and explore the moga land. They invite all the users to join them.

The game has solid gameplay, including PvE, PvP (1:1 and 5:5), and guild system. Each MOGA has different elements, rarity, class, attributes, and skills, which greatly enrich the gaming experiences.

Q – How are you integrating NFTs in your ecosystem? What are the various NFTs available, and how are they used?

There are thousands different looking monsters in the game. They will cater to all kinds of users. We will also have weapons as NFTs. Users can acquire these weapons either by winning battles or making trades in the marketplace. If a player successfully collects a complete set of the same element, the matching MOGA will gain bonus points in attributes.

All NFTs are ERC721 compatible and tradable at the in-game marketplace and several partner NFT marketplaces.

Ani: As you mentioned about Moga, I have a community question. It makes sense to ask now to maintain the flow.

Q.Twitter – What role does genesis Moga play in the game, and how do they impact. Any special abilities for them compared to others. Why only 9000 genesis Moga.

The game is still under development. We will release the beta version in Feb 2022 and launch the official version in March 2022.

In the meantime, we will offer 9000 GENESIS MOGA NFTs in blind box sales before the game’s official launch. Genesis moga is from 3 rarity categories: super rare, epic, and legendary. Genesis moga will be visually distinct from normal moga and come with unique colors and particular backgrounds.

There is only 1 GENESIS MOGA for each color and background. They also come with additional in-game advantages, including the freedom to switch their element in battles, higher GGM rewards from winning, more accessible energy per day, and other secret bonuses.

The first blind box sale of 600 Super Rare GENESIS MOGA took place on Treasureland NFT Marketplace on December 21st and was a super success. All NFTs were gone in a minute. We will announce the next NFT auction soon. Please follow our Twitter for announcements.

More Information About the Game Features

Q – So, is there a marketplace where I can purchase a Super Rare Genesis Moga?

Currently, only on Treasureland NFT marketplace. We will soon announce more partners and our marketplace. Stay tuned.

Q – Your token is called “GGM.” What are its use cases?

Monster Galaxy is free to play. Everything you do in the game will earn you GGM, the game token. Including completing quests, winning battles, and selling mogas. We also have staking incentives for staking GGM tokens.

We understand that to keep the game fair to users and sustainable, balancing the token supply and demand is the most important thing. Also, we will do the following:

Q – What are your plans? I believe you will also bring in Land Ownership as NFTs.

The game is on track to have a beta release in Feb and an official launch in March. Phase 1 will have Quest (PvE), challenge mode (PvP), and instance mode, together with the marketplace and staking.

When we updated users on the gameplay, we received tons of feedback and suggestions. We will incorporate several best tips for Phase two, including guilds and land systems.

We are still working on the detailed specs and will announce them later. I’m glad that users want to land as NFT. That in-lines with our plan too. Please follow our Twitter for the announcement.

From this segment, the five best questions shared 500 BUSD. One of these questions is as follow:

Q.Twitter – $GGM  is Game Token On Monster Galaxy. How much $GGM can I earn by playing? Is there a limit to making? Can you explain the different ways to get $GGM?Are there any other options or other sources where we can get $GGM or just NFT? Can we sell or rent our NFT in GAIA CLUB Market?

A dozen ways to earn GGM include completing quests, winning battles, and selling mogas and weapons. We also have staking incentives for staking GGM tokens.

There will be a daily cap of earning GGM from the system, but you can get endless GGM by playing marketplace such as buy low sell high.

We will also have a sponsorship program that allows users to rent/lend mogas. We will release all this info shortly. Please keep an eye on our Twitter.

The Altcoin Buzz community gratefully thanks James Cao for participating in the Monster Galaxy AMA session on January 4th on our Telegram channel. 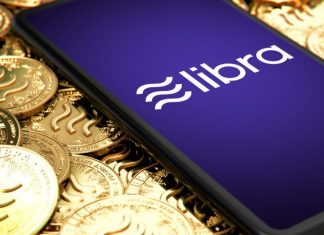 Another Bank is Concerned About Libra

Lesia Dubenko - June 28, 2019 0
Facebook's coin Libra continues to be in the spotlight. The Singaporean Central Bank has provided the latest comment on it. Following the announcement of Facebook's...