The platform was single-handedly developed by Andre Cronje and launched in February 2020. Just immediately after launch, Yearn Finance has gained significant adoption in the crypto sphere that can easily be seen with the increase in the value of the YFI token. In early September, the platform’s native token, YFI, has even reached a peak value of approximately $44,000.

To access the application, go to their official page.

The yearn.finance site contains the below UI applications: 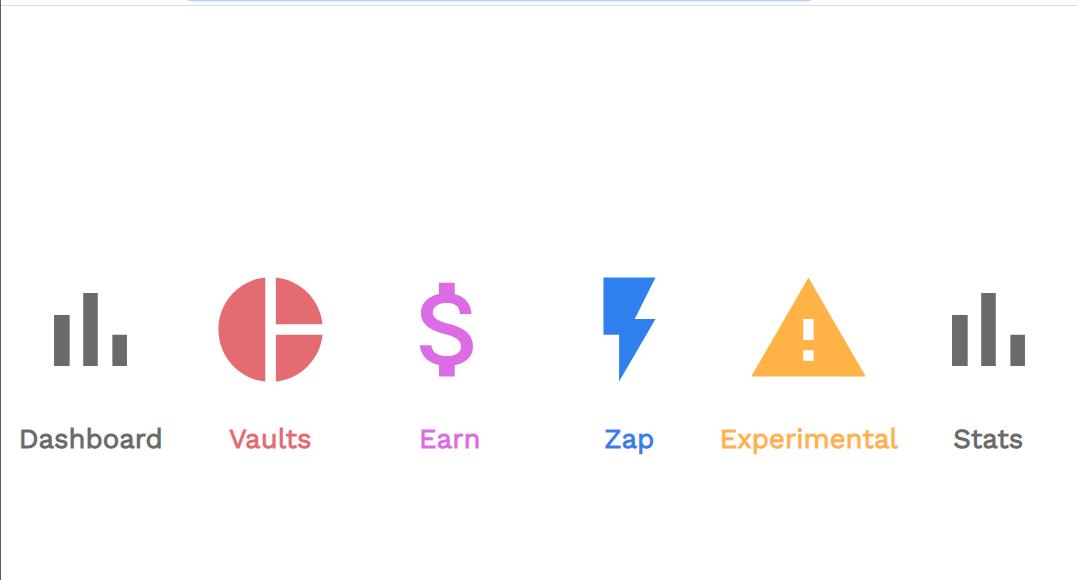 Vaults are the pools of funds that follow certain strategies. It helps the community members to work together in building strategies that determine the best yield protocol. 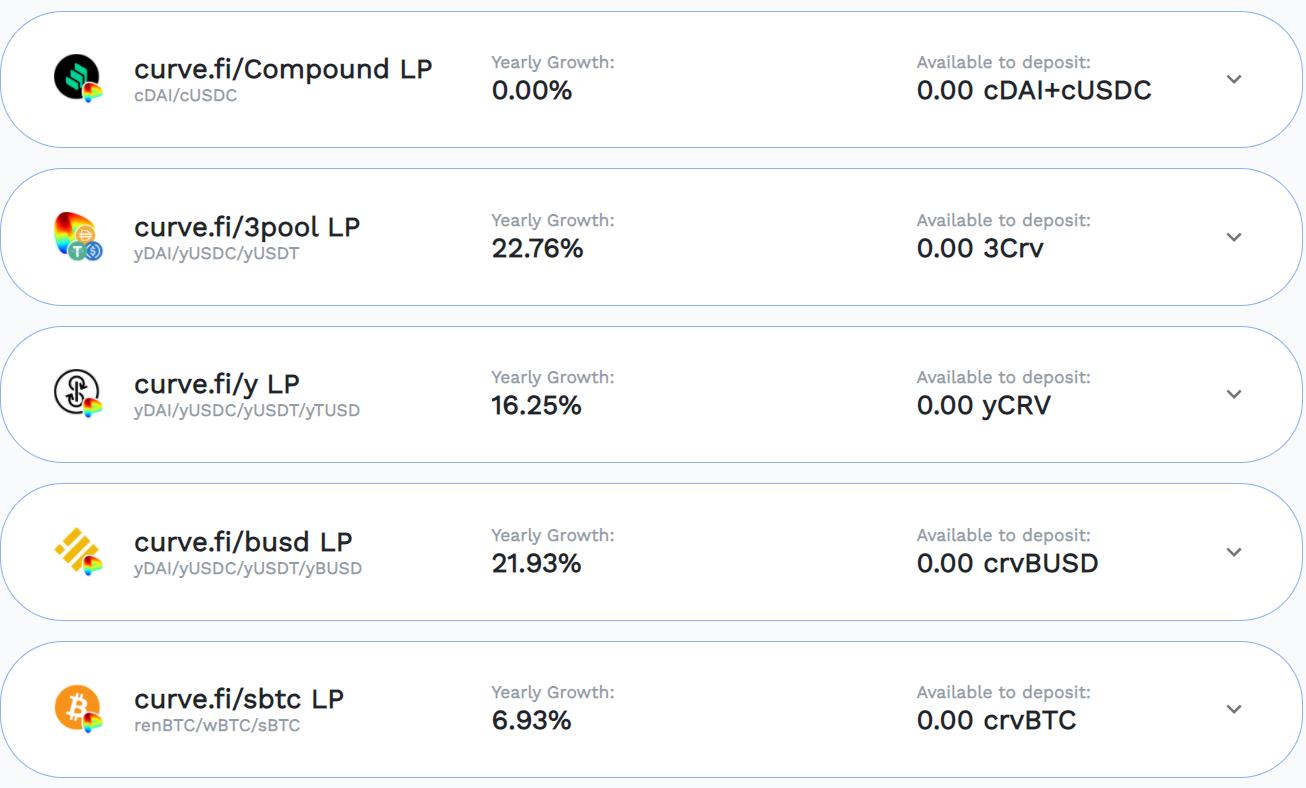 Earn is a lending aggregator that automatically switches the user funds between lending platforms. Users can deposit DAI, USDC, USDT, TUSD, WBTC, or SUSD into high yielding DeFi protocols like Compound, Dydx, or Aave whenever the interest rate changes.

Users can use the Earn page to deposit into these lending aggregator smart contracts. The code behind the application manages and benefits the users to obtain the best high-interest rates among all the platforms involved. 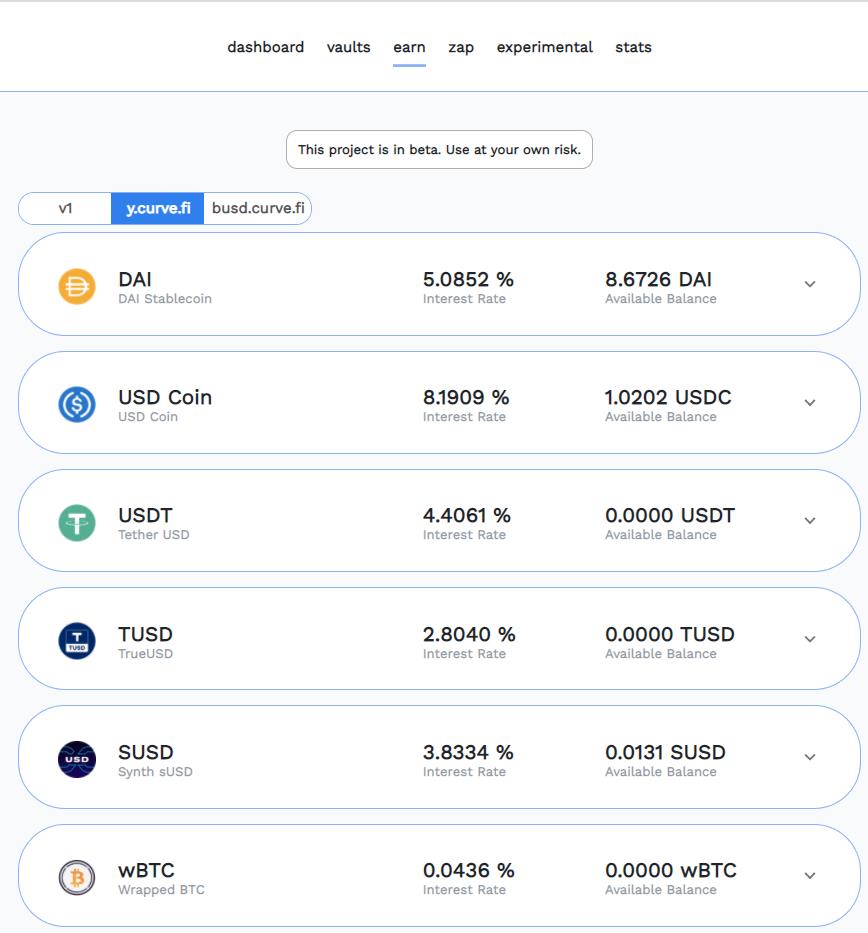 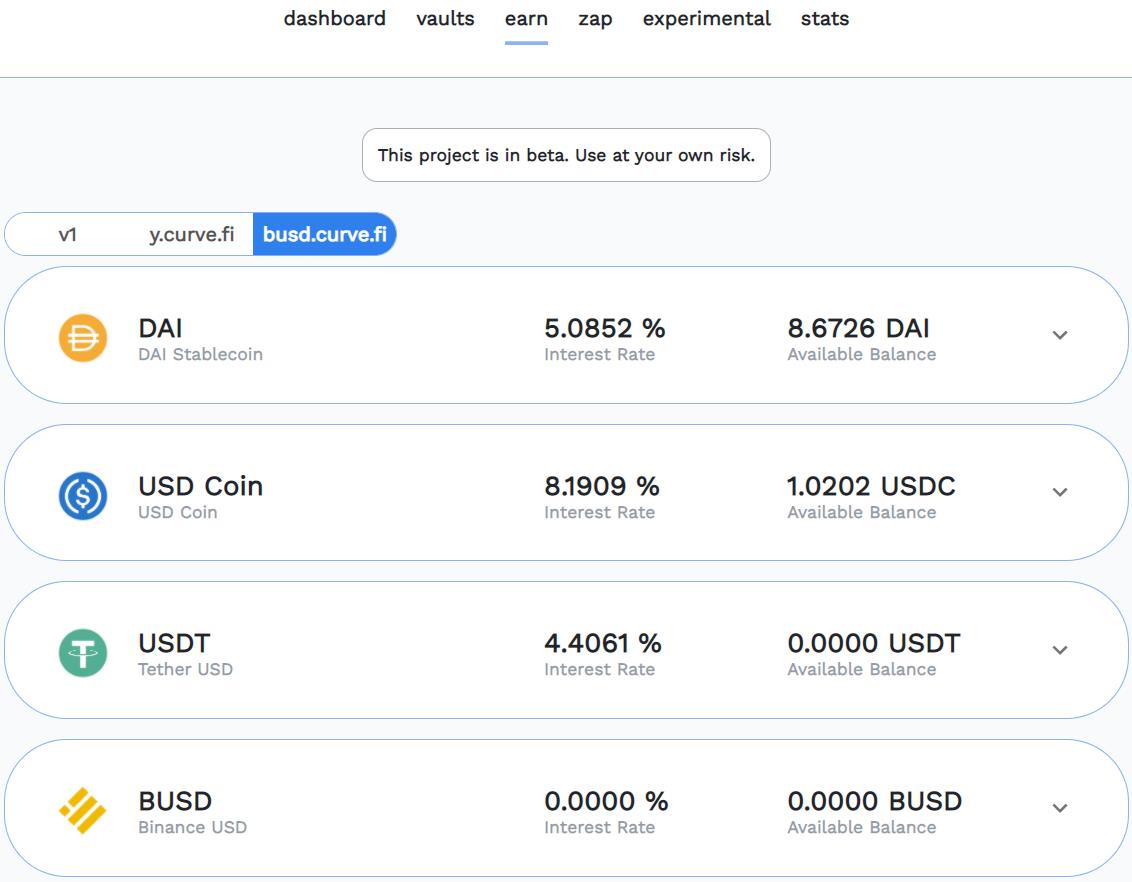 Zap allows the users to switch between various stablecoins with just one contract interaction to reduce transaction costs. Users could also save on gas fees by either zapping directly in or out or curve pools from the base assets. It allows the users to swap into and out of (known as “Zapping”) several liquidity pools available on Curve.finance. 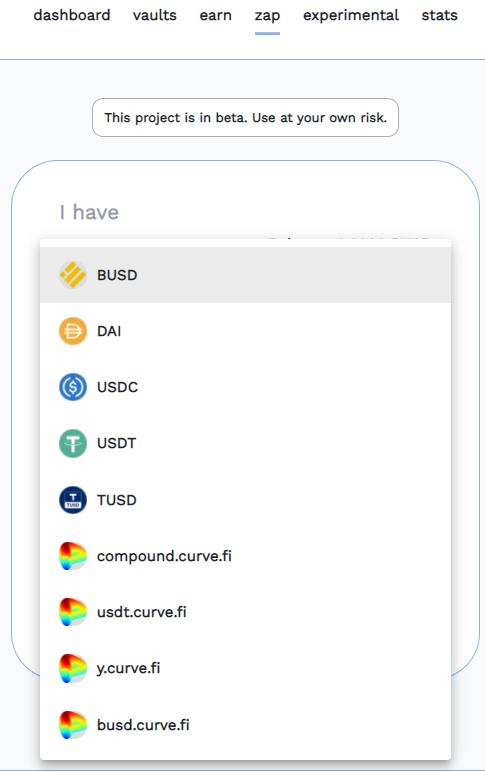 YFI (ERC20 token) is the platform governance token and can be used in doing governance activities like voting on a proposal for protocol upgrade/change. Until now, only 30,000 were minted and fully distributed.

Users need to stake their YFI in a governance contract to get voting rights. And in return, these YFI holders receive a percentage of protocol profits for each of Yearn’s products at regular intervals. The Treasury Vault temporarily holds the profits of stakeholders and these profits are distributed to YFI holders once the treasury is at or above $500k USD. Profits are distributed as yCRV tokens.

Users can claim the rewards within three days of voting. Once you have voted, your YFI token will be locked for three days, i.e., you won’t be able to unstake your token.

How Does Yearn.Finance Work?

Yearn Finance is an open-source network and the underlying concept of the platform is to move the user’s funds among different lending protocols (Compound, Aave, Curve, and DyDx). The user funds are switched from one asset pool to the other depending upon the APY, i.e., it switches users holding from the least APY to the highest APY-yielding protocol.

The stablecoins used by the platform: DAI, USDC, TUSD, SUSD, WBTC, and USDT.

Yearn Finance works similar to other lending platforms. The users can deposit any ERC20 stablecoin such as DAI, USDC, USDT, TUSD, or SUSD into the protocol, and in return, they receive an equivalent amount of yTokens (i.e., yDAI, yUSDC, yUSDT, yTUSD, and ysUSD). The yTokens are just like any other ERC20 token. The underlying stablecoin is made available to lend.

And the catch is here. Instead of lending the stablecoins into any particular protocol, the Yearn Finance platform automatically switches the tokens into a protocol with the highest yield to maximize user profit.

The network also charges a small fee that is deposited into the the platform’s pool and can be only accessible to YFI token holders.

yearn. finance is the main application component that is responsible for switching among various lending providers, i.e., DyDx, Aave, and Compound. It is designed in a way that it autonomously moves your funds to more profit-giving providers.

Creates 5x leveraged DAI vaults with USDC. Over $9 million in short positions created with an average of 16% profit.

The first y.curve.fi <> sUSD curve.fi meta pool. Decommissioned currently in favor of a native asset pool. Before decommission, had over $10 million in assets.

Farming YFI can be done by using a staking pool. There are three ways through which it can be done.

The BPT is received from a balancer. exchange pool that is split between YFI and curve.fi tokens. This allows you to farm $CRV while receiving a yield from yearn.finance and receive trading fees from curve.fi.

The output token from this pool gives you the following rights: 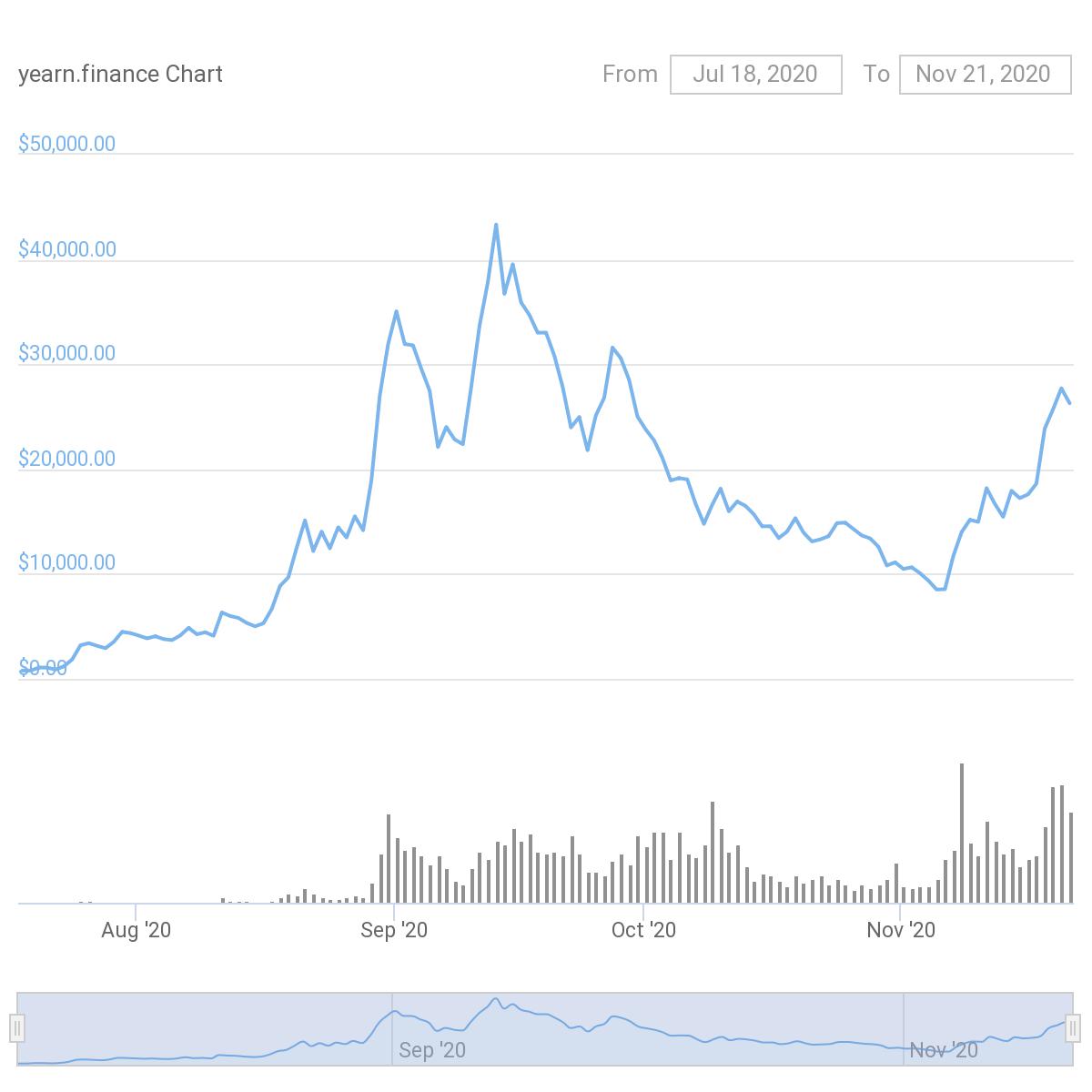 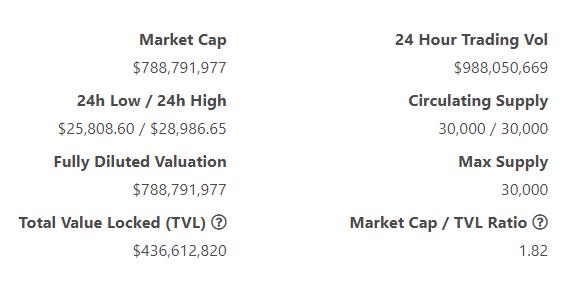 The Yearn Finance project has been in the limelight since its launch. The YFI token has even crossed the value of $40,000 within a few months of its inception. This makes the token the most expensive token so far in the blockchain ecosystem. No other token has reached this milestone ever. Also, the platform aims to work efficiently with other DeFi lending platforms with a motive to provide a high yield to users. We can expect a high rise in the platform’s user base from those who want to benefit from the unique features supported by the project. 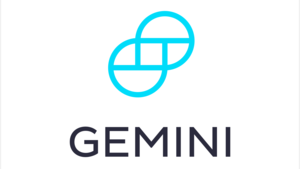 Assets on Gemini Are Now Insured

Lesia Dubenko - October 8, 2018 0
Yusuf Hussain, Head of Risk at Gemini exchange, broke the news which is set to elevate the spirit of the whole crypto community. He announced...