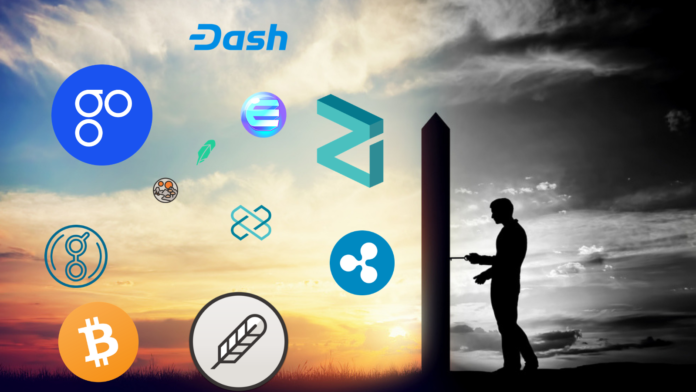 A new report entitled 2nd Global Cryptoasset Benchmarking Study by Cambridge Centre for Alternative Finance has presented a comprehensive overview of the current crypto market and its developments. One of the key findings is that the number of crypto users has doubled.

The report is based on the data collected from over 180 start-ups, established companies, and individuals from 47 different countries across all major regions, including Europe, Asia, Middle East and America between May 2018-July 2018. The participants, which include among others Circle, Coinbase, Bitmax filled out two online surveys between May and July 2018 via secure web-based questionnaires. The findings show that in spite of the problems the crypto community is enlarging and maturing.

No longer cryptocurrencies only

The report begins by drawing attention to the fact that 2017 “has seen a tremendous explosion in the number of tokens that have been issued on top of existing platforms rather than coming with their own, custom distributed ledger.” Therefore, the term “cryptocurrency” no longer fully encompasses the reality, and thus it is better to use “crypto assets” when describing the phenomenon.

It proceeds to note that since April 2017, when the first edition came out, the cryptoasset ecosystem has changed significantly, as “the aggregate market capitalisation of cryptoassets skyrocketed from $30 billion to more than $800 billion at its peak in early January 2018, until coming down again to hover at around $200 billion.”

The mentioned market explosion has attracted numerous new users. In fact, millions of them have entered the ecosystem. Now, the number of total user accounts at service providers “exceed 139 million with at least 35 million identity-verified users, the latter growing nearly 4X in 2017 and doubling again in the first three quarters of 2018.” 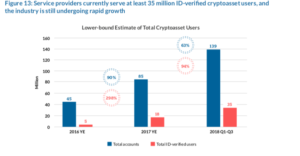 Altcoins on the rise

Altcoins were also the focus of the report. In it, it is stated that multicoins (the authors choose to call them that) have received a lot of support this year from crypto exchanges. In fact, it nearly doubled going from 47% of all service providers in 2017 to 84% in 2018. The authors posit that the primary reason behind this is ” the emergence of common standards on some cryptoasset platforms (e.g. ERC-20 on Ethereum) that has resulted in a rapid increase in the supply of tokens, airdrops and forks.” 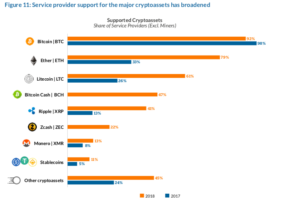 Crypto firms are also continuously expanding. At the moment, 57% of cryptoasset service providers are operating across at least two market segments “to provide integrated services for their customers, compared to 31% in early 2017.”

It is also added that “a notable share of the energy consumed by these facilities is supplied by renewable energy sources in regions with excess capacity.” Plus, mining, contrary to wide beliefs, is far less concentrated geographically than previously deemed and a lot of it is happening “in locations with excess capacities in renewables (in particular hydroelectric power), such as for instance Western and Southwestern China, the North-East and North-West of the USA, as well as South-Eastern Canada and Iceland.”

So perhaps mining is better than watching cat videos after all.

Unsurprisingly, the security issue is also brought up in the report. The authors state that “cryptoasset holders are an obvious target for hackers and criminals as blockchain transactions are generally irreversible once the cryptoasset leaves the intermediary (e.g. exchange or storage provider)” The same kinds of conclusions were reached earlier by the New York State Office of the Attorney General.

The report estimates a loss of more than $1,5 bln not including various scams and fraudelent ICOs which are rampant in the cryptoworld. 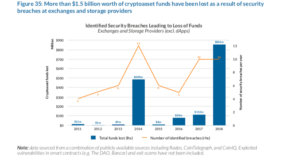 The surveyed crypto exchanges also expressed concern over its relationship with banks which is still considered to be a major challenge. The concern increased considerably since 2017 for large exchanges.

Regardless of these problems, the report also emphasizes that crypto asset industry’s attempts to self-regulate prove and tackle the existent manipulation which they are susceptible to shows that the industry is maturing. 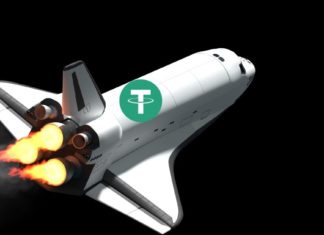 Camille Lemmens - May 31, 2022 0
Tether, or USDT, has launched on Polygon. It's the largest stablecoin in market cap, with over $73 billion. Thether brings stability to the Polygon...