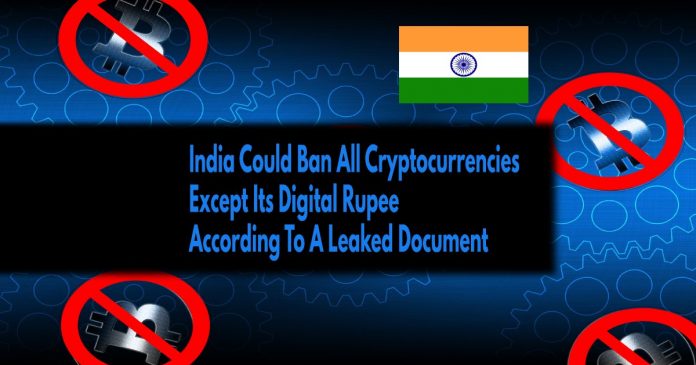 India has been pretty rough on the crypto space but has now gotten even worse. According to a document that has been leaked on Scribd, the country will ban all cryptocurrencies with one exception, the Digital Rupee.

The document, titled “Banning of Cryptocurrency & Regulation of Official Digital Currencies” has been uploaded on the 15th of July 2019 by Varun Sethi, a tech lawyer, however, there is no official announcement regarding its authenticity.

“any information or code or number or token not being part of any Official Digital Currency, generated through cryptographic means or otherwise, providing a digital representation of value…or functions as a store of value or a unit of account and includes its use in any financial transaction or investment.”

The document also states the following:

“No person shall mine, generate, hold, sell, deal in, issue, transfer; dispose of or use Cryptocurrency in the territory of India.”

The document is quite confusing and it makes me doubt its authenticity a little bit, but hey, when have governments ever been ‘not-confusing’. I believe the above statement only refers to foreign countries, otherwise, it would not make any sense.

Taking away everything said above, the distributed ledger technology will remain lawful for educational purposes.

What’s the punishment for breaking the law?

The punishment can vary from fines to 10 years of jail, according to the document. If the document turns out to be real, the situation is unclear and we should get more details along the way.

altcoinbuzz - April 30, 2018 0
Today was the day that the long-anticipated ICO platform by ICON was released; ICONest. ICONest is a service designed to simplify creating and developing dApp projects....