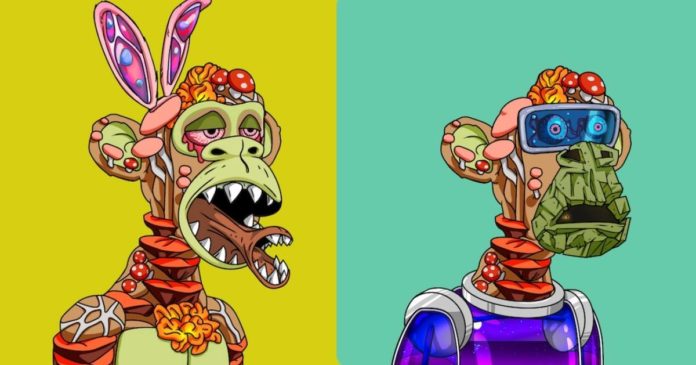 What Is the Mutant Ape Yacht Club?

The Yuga Labs team launched MAYC as a way to express their gratitude for their community. It gave BAYC NFT holders a second NFT collection. The Mutant Ape Yacht Club NFT collection is distinct but based on Bored Ape qualities and attributes. The MAYC NFT project also had the goal of integrating newcomers into the BAYC community. The launch of the NFT collection completed the first stage of their project roadmap.

BAYC holders received an airdrop of 10,000 mutant vials. This was their method to create a mutant ape. The public had an opportunity to mint a Mutant Ape from the 10,000 NFT collection.

The purchase of a Mutant Ape Yacht Club NFT was possible in one of two ways. You could either buy a Mutant Ape or create your own by injecting your Bored Ape with the mutant serum. The holders who kept their Bored Ape NFTs received an airdrop of mutant serum. This was an NFT that, when applied to the smart contract holders, produced a mutant version of their original Bored Ape.

The airdropped serum gave holders the opportunity to sell this additional NFT. That is to say, BAYC holders did not have to apply the mutant serum. If they did choose to apply the serum, only one Mutant Ape could be created from the original Bored Ape.

The original BAYC NFT was not destroyed during the mutation process. The holders were allowed to preserve their original NFT. By applying the serum, a new Mutant Ape transpired from their original ape. The community responded very well to this incentivized system. The Mutant Ape Yacht Club NFT collection quickly gained popularity.

Serums came in a few varieties. The application of an M1, M2, or M3 Serum vial was possible to any Bored Ape. Only one serum type could be applied once to an existing ape. The resulting Mutant Ape had distinctive mutations. However, the Mutant Ape still retained the essential characteristics of the original Bored Ape.

Mutant Apes can only be created by exposing an existing Bored Ape to a vial of MUTANT SERUM or by minting a Mutant Ape in the public sale.
All mutant serums were airdropped to BAYC holders. pic.twitter.com/DXBz6O6vJR

Applying the serum to a Bored Ape caused several visual changes. These included dripping skin and projecting neck growths. Misaligned teeth and bulging eyes were also mutations. A ripped shirt, green slime spilling from the face, or an ape with a creature as a hat are even more examples of distinctive characteristics.

Serums came in three distinct levels of scarcity. They were M1, M2, and M3. The serums were used in conjunction with an existing Bored Ape NFT.

The M3 serum was the rarest with just eight airdropped to existing Bored Ape holders. There were 7,500 M1 serums and 2,492 M2 serums. BAYC holders had their chance to mint their Mutant Ape as soon as the first 10,000 MAYC NFTs were minted out. Apart from the gas fee, holders could use the smart contract mechanism to expose their Bored Ape to a vial of serum to create Mutant Apes for free.

How Do You Mint Mutant Ape Yacht Club NFTs?

It is now not possible to mint a Mutant Ape Yacht Club NFT as they are all minted out. However, interested buyers can purchase them from a secondary marketplace such as OpenSea.

The Yuga Labs team made the MAYC NFTs available to the public via a Dutch auction. This was on August 28, 2021. Starting at 3 ETH, the price was gradually lowered until the collection sold out. As part of any Dutch auction, a minimum price had to be set. For the MAYC collection, this was 0.01 ETH.

The Yuga Labs team turned the public sale into a “stealth drop.” This was to guarantee a fair distribution. Keeping the details of the mint under wraps prevented the larger crypto community from turning up with minting bots. The MAYC collection sold out in less than an hour despite the late announcement, generating about $90 million in primary sales.

Yuga Labs is the company behind the Bored Ape Yacht Club. There were four members of Yuga Labs at the time, all of whom used aliases. The two co-founders are Gordon Goner and Gargamel, along with two friends, No Sass and Emperor Tomato Ketchup, who assisted with the development.

All four remained anonymous until February 2022 when Gordon Goner and Gargamel’s real names were revealed by BuzzFeed. Gargamel was writer and book critic Greg Solano. While Wylie Aronow went under the name of Gordon Goner.

They both then shared photos of themselves online with their Bored Apes on Twitter. Shortly after, No Sass and Emperor Tomato Ketchup also revealed themselves. Karem Atalay is the actual person behind Emperor Tomato Ketchup. Kerem is an engineer who worked with the BAYC founders to develop the NFT collection. Kerem has a degree in Computer Science from the University of Virginia.

Zeshan Ali is the person behind the No Sass pseudonym. He too is a Computer Science graduate from the University of Virginia.

You can purchase Mutant Ape Yacht Club NFTs from secondary markets such as OpenSea and X2Y2. The process is generally similar to whichever platform you use.

To purchase the NFT, you must first fund your wallet. As the MAYC NFT collection is on the Ethereum blockchain, your wallet needs to hold enough Ethereum to cover the cost of the NFT and the gas fee. You can use MetaMask to hold your Ethererum and transact with OpenSea.

Once your wallet is set up and holds enough ETH, head over to the MAYC NFT collection on OpenSea. Once you have chosen the NFT you’d like to purchase, you can click on Buy Now. Follow the on-screen prompts to confirm the purchase.

Are the Mutant Ape Yacht Club NFTs a Good Investment?

This is a difficult question to answer as everyone has different investment needs and circumstances to make an investment. For many, the collection is already out of reach. As of September 8th, 2022, the floor price of a MAYC NFT is 13.29 ETH. Even with Ethereum down around 65% from its all-time high, the cheapest ape costs nearly $22,000 USD.

However, there are some benefits of holding a MAYC NFT. The social status attached to the project itself would perhaps be the biggest benefit of possessing a MAYC NFT. Additionally, by owning this NFT, holders become part of an exclusive community. Anyone holding a BAYC or MAYC are often regarded as connoisseurs within the NFT space. If a MAYC NFT was held earlier in the year, holders received an airdrop of the Yuga Labs $APE coin.

The barrier to entry is high, but even at today’s prices, you could earn money off your MAYC NFT. It could be sold for profit once the NFT regains its bullish momentum. Alternatively, you could license it out to magazines, marketing agencies, or music production companies to earn a passive income.

Even though investing in the MAYC and becoming a member of the community has a wealth of advantages, it’s not for everyone. Yes, you may receive additional air drops in the future. You probably will be invited to exclusive events or project opportunities. However, the barrier to entry is really high and there are different ways to expose yourself to the Yuga Labs selection of blue-chip NFT collections.  Although not exactly the same, Otherdeed for Otherside is a much cheaper entry to get exposure to Yuga Labs. Meebits is another collection. Alternatively, if you are a believer in Yuga Labs and what they are building, you could easily purchase $APE coins to be part of the success.

⬆️ ALTCOIN BUZZ – BINANCE – GET UP TO $800* ON SIGN UP
Sign up with Binance using our Affiliate Link and get the following benefits:

Click on the following link (as per your location) to avail the benefits.
Binance Global
Binance US
For further details visit our special Binance Page. Terms & Conditions Apply.
Disclosure: Altcoin Buzz may receive a commission, at no extra cost to you, if you click through our links and make a purchase from one of our partners.