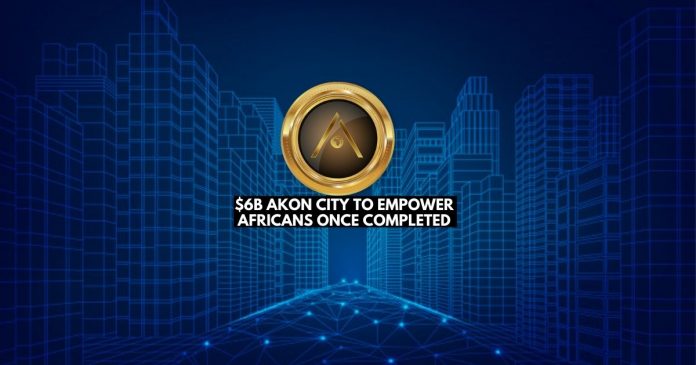 The construction of Akon’s $6 billion worth Akon City is underway. The Grammy-nominated rapper has disclosed that once completed the project will empower Africans to overcome current challenges.

Akon City is a crypto-based city that would be powered solely by Akoin a Stellar Blockchain-based cryptocurrency. The township has begun construction. After signing a $6 billion construction contract with US-based engineering firm KE International and obtaining $4 billion from investors.

Jon Karas, Akoin co-founder, and President disclosed that the construction of the 2,000 acres Akoin City has begun in Senegal. Additionally noting that the project is in two phases and would be completed in 2030.

According to him, phase one of Akon City will be completed by 2023 and would offer efficient tools for residents to utilize cryptocurrency in real-time. He further shared that a 5,000-bed hospital would be constructed in the city.

Additionally, the first phase also involves the construction of other institutions that make up a modern-day city such as homes, hotels, schools, police and fire stations, an airstrip, a mall, a waste facility, a solar power plant, amongst several others.

Akoin to unite Africa under a currency

Similarly, Lynn Liss, Chief Operating Officer of Akoin in a statement noted that the new initiative is aimed at uniting all 54 Africa countries under one currency. Noting that the Akoin digital currency has its wallet, enabling users to trade amongst partnered cryptocurrencies via a proprietary and private Atomic Swap technology.

Furthermore, Liss disclosed that Akoin would offer business and services to fast-rising entrepreneurs and the growing youth population in Africa. Noting, that the crypto would provide real value and utility to help individuals create life sustainability, economic and global inclusion.

Liss further stressed that Akoin would improve Africa’s financial infrastructure. She noted Akon city is not the only project been developed for Africa. Adding that Akoin Foundation, in partnership with Effect.AI, is in the process of launching Opportunity Hubs throughout Africa.

Akon and Effect.AI’s Opportunity Hubs is a project that enables Africa youths to study about artificial intelligence and blockchain skills, and earn Akoin in the process.

With more than 60% of the current population in Africa being under 25 years old, that majorly rely on mobile phones to do everything like the rest of the world. Liss believes the Akon city and Akoin crypto project would be a success.

Although, many African countries have expressed doubt and uncertainty towards cryptocurrencies. It’s worth noting that Africa residents are currently embracing crypto, as well as other blockchain initiatives faster than any other region.

However, several central banks have hinted at the possibility of launching a state-controlled digital project. South Africa’s Revenue Service recently published guidance on how it would tax cryptocurrencies. Although Zimbabwe’s Reserve Bank banned banks from processing cryptocurrency payments a High Court in the however reverse the decision.

Akon also declared his stance that digital currency “could be the savior for Africa”. He reiterated that crypto would help the continent overcome serious challenges. Such as high inflation, government corruption, amongst several others.

Ani - March 28, 2020 0
You have been hearing about Decentralized Finance (DeFi) for quite some time. You might have also been avoiding the segment, thinking it is complex....