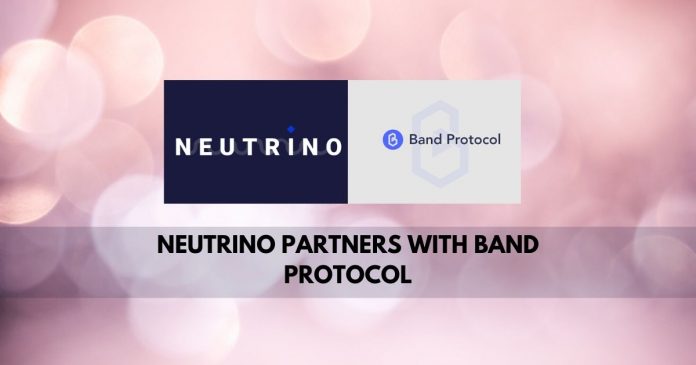 Top DeFi application Neutrino has announced that Band protocol will be its official provider of secure price feeds.

Neutrino which is built on Waves technology will employ Band Protocol to provide secure well-rounded price feeds for its collateral assets among which is its WAVES/USD trading pairs.

This partnership is made possible due to a collaboration between Waves and Band Protocol. Both teams are working together to create the next generation of Web 3.0 apps.

More details on the partnership

The algorithmic price-stable multi-asset protocol in an official blog post disclosed that Band Protocol will provide the spot market price WAVES. Ensuring that it is accurate, in real-time and without having to pay exorbitant fees for price updates. This, essentially, further ensured that all Neutrino smart contracts are immune to price fluctuations and manipulations.

Speaking on the announcement, Alexeyi Pupyshev, Co-Author and Product Advisor of Neutrino disclosed that they were thrilled to support the stablecoin project. Adding that they will provide the project with secure, trusted, and scalable cross-chain data.

CEO and Co-Founder of Band Protocol, Soravis Srinawakoon, on the other hand, pointed out that integrating Band Protocol oracles will help eliminate all forms of vulnerabilities. Srinawakoon further added that the partnership is the right step to ensure Neutrino remains secure.

About Neutrino and Band protocol

Built on Waves, Neutrino is an algorithmic price-stable DeFi toolkit that enables the creation of stablecoins linked to real-world assets. USDN was the first-ever synthetic asset created on their Neutrino Protocol. Band Protocol, on the other hand, is a cross-channel oracle known for linking real-world data to smart contracts. Known for its “deterministic, verifiable computations”, they find it difficult to securely access data outside blockchain networks. However, Band Protocol is highly reliable when dealing with on-chain applications like DeFi, prediction markets, and games.

Band protocol recently announced a partnership with Frontier wallet and has also integrated Wanchain as one of its official validators.