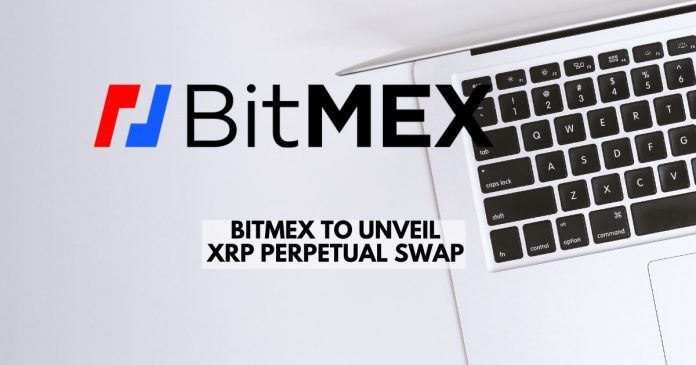 According to an announcement, BitMEX will launch the XRP/USD swap contract on February 5 at 4:00 UTC.

We at BitMEX are proud to announce that trading of a new perpetual swap on the XRP token (XRPUSD) will begin at 0400 UTC on 5 February 2020.

The exchange stated that it was “proud” to reveal its latest trading pair.

The company’s website noted that the XRP/USD contract would offer a leverage of up to 50 times. “All margin is posted in Bitcoin, which means traders can go long or short this contract using only Bitcoin,” the exchange explained.

Besides, BitMEX will add XRP to its derivatives options.

Notably, both Binance and OKEx have opted for an XRP/USDT contract recently. Both are offering up to 75 and 100 times leverage, respectively. Other crypto exchanges, Delta and BaseFEX, have also been offering such contracts for some time now.

The exchange has also been improving lately, with its recent addition of native SegWit (bech32) addresses for bitcoin withdrawals.

Hayes is being his usual self

Now, Ripple users might be celebrating the listing of XRP and looking forward to more meaningful price action. But BitMEX CEO Arthur Hayes decided to taint their party. Following the announcement by the company, Hayes tweeted a controversial statement that brought the public’s attention to the actual state of affairs within the exchange.

Is it called Ripple, XRP, or dogshit? Who knows, who cares. It’s worth more than zero so it’s time to trade the USD pair on BitMEX. Boo-Yaka-sha! https://t.co/pa3T5vd5kl

His tweet reads: “Is it called Ripple, XRP, or dogshit? Who knows, who cares. It’s worth more than zero, so it’s time to trade the USD pair on BitMEX. Boo-Yaka-sha!”

Some might be surprised by this tweet, especially since BitMEX wrote that it’s proud to make this addition. But they really shouldn’t be as Hayes is just being his usual self. He is showing that he doesn’t care much about the quality of the projects he lists as long it favors him. Plus, he also hates Ethereum.

Many crypto enthusiasts have condemned this type of outburst, some noting Hayes’s statement won’t land well with the Ripple community.

Chris Perrotta - April 30, 2019 0
In “This was the NEWS” we take a look at the most important news of last week. What has happened in the crypto space...