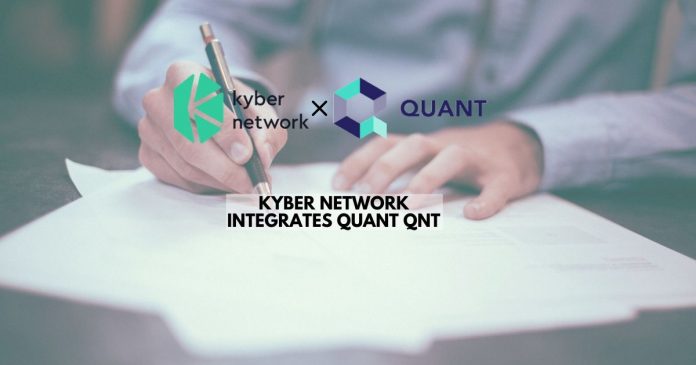 Kyber Network has disclosed that it will be running an Automated Price Reserve for the Quant Network token (QNT) on its network.

According to the announcement, the Quant token (QNT) will be accessible through KyberSwap and other decentralized applications (DApps). QNT will also be available related platforms that are powered by Kyber’s on-chain liquidity protocol.

🆕️Token Reserve: QNT@quant_network @Overledger is now available on Kyber Network.$QNT is accessible through @KyberSwap and other DApps and platforms that are powered by our on-chain liquidity protocol.

In a conversation with the Altcoin Buzz team, a member of the network explained that the addition of the QNT token was because it’s a good asset. And also has the ability to attract and retain value, which invariably increases liquidity in the Quant network.

Kyber Network currently supports over 70 ERC20 tokens and powers over 100 integrated projects including popular wallets Enjin, MEW, Trust, the HTC Exodus smartphone. As well as DeFi platforms Nuo, DeFiSaver, InstaDApp, Set Protocol, Melon, among several others. It also claims to be the most used and integrated decentralized finance (DeFi) protocols in the world. With over $1 billion worth of transactions facilitated since its launch.

Quant Network is a United Kingdom-based technology provider that enables digital interactions. And also helps create a secure digital future for the benefit of enterprises, regulators, governments, and individuals.

It’s worth noting the Network recently gained major traction after creating an Operating System called “Overledger.” That enables the connection of any isolated networks together, at internet scale, and simultaneously.

Overledger is the world’s first blockchain operating system (OS) that not only interconnects permissioned and permissionless blockchains. But also legacy networks, enterprise platforms, and business applications to the blockchain. Overledger currently supports 11 permissioned and permissionless DLTs to interoperate and also assist financial institutions. And individuals across the globe benefit from the true potential of interoperability, choice and also avoid lock-in with single DLT networks.

Notably, Quant is now also releasing the Overledger Network in Q2 2020 as the Network of Networks for a Hyper-connected world.

Since the launch of the Kyber Network, it has witnessed major growth in the blockchain community. The network recently announced that its users can now participate in KyberDAO to earn Ethereum (ETH). All they need to do is to delegate their voting power to StakeWith.Us, a third-party staking pool.

Additionally, the on-chain liquidity protocol announced the launch of its Katalyst protocol upgrade and KyberDAO.

Ruma - January 25, 2021 0
Polkadot has gained a lot of attention in the blockchain eco-space. Many projects have now been implemented on Polkadot. In our previous article, we explored...

We Made 91% In 3 Weeks By Trading Using Evai Ratings