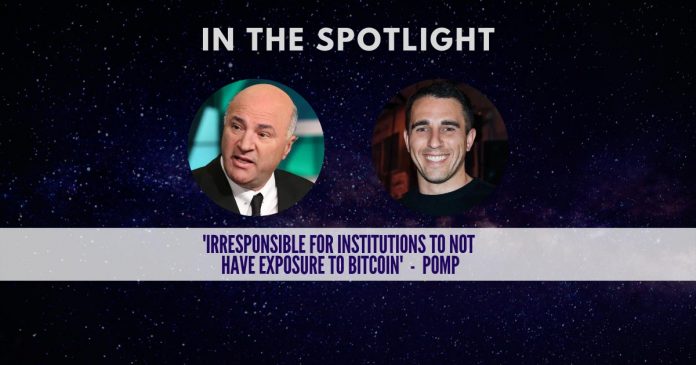 During an episode of CNBC’s Squawk Box, Shark Tank co-host Kevin O’Leary called Anthony “Pomp” Pompliano crazy for holding 50% of his net worth in Bitcoin.

In an interview with CNBC’s Squawk Box, Anthony ‘Pomp’ Pompliano discussed why Bitcoin has been climbing up again recently. According to Pompliano, investors are embracing Bitcoin as a “safe haven” amid the US-China trade war.

O’Leary, who is openly admitted to being a cryptocurrency skeptic, told Pompliano that the small amount of “crypto crap” that he bought 2 years ago, back then worth $100, was now only worth $30.62. O’Leary mentioned he was holding Ethereum, XRP, Litecoin and Bitcoin Cash.

“If this is really such a great idea, why is there really only one Vegas game working?”

Pompliano said that he was there to talk about Bitcoin and that Bitcoin is the only cryptocurrency worth buying. Furthermore, Pompliano argued why he believes that Bitcoin should be part of the investment portfolio of every institution.

O’Leary responded by asking how much Pompliano has invested in Bitcoin. Pompliano told O’Leary over half of his net worth now resides in the world’s largest cryptocurrency by total value.

“I forbid that, that’s insane. In any one stock, never more than 5 percent, in any one sector, never more than 20 percent. I teach this stuff! You never go beyond concentrations of that nature! Fifty percent! Shame on you! That’s nuts!”

See the discussion between O’Leary and Pompliano here:

Monster Hunt Partnership Give you 29% APY in QuickSwap