Jeremy Allaire, the CEO of the Goldman Sachs-backed cryptocurrency startup, Circle, spoke in an interview with Reuters about the importance of global cryptocurrency industry regulations.

Many industry experts and leaders believe that global regulation will be the next evolutionary step for the cryptocurrency markets. Allaire spoke about the level and quality of regulations that the industry needs in order to see continued growth.

Read more about the interview with Jeremy Allaire: https://altcoinbuzz.io/circle-ceo-global-cryptocurrency-rules-are-needed/

Last week, the news came out that HTC is developing an Android phone that will be powered by blockchain technology. The phone, named Exodus 1, has been designed to store the owner’s cryptocurrencies securely.

The significance of integrating blockchain technology in the phone is that it bolsters the security and privacy of a user’s assets, and will in the future help with protecting the customer’s data and identity.

Thinking about buying a new smartphone? Read more about the Exodus 1 here: https://altcoinbuzz.io/htc-launches-blockchain-and-crypto-focused-smartphone/

The news many investors have been waiting for: cryptocurrency startup Bakkt has announced that it will bring its Bitcoin futures trading into operation on December 12, 2018, subject to regulatory approval. The news has been received with a lot excitement among the crypto community.

Run by the Intercontinental Exchange (ICE), which also owns the New York Stock Exchange (NYSE), the Bakkt startup is backed by the likes of Microsoft and Starbucks.

The much-publicized blockchain platform that has a decentralized application (DApp) ecosystem now reportedly has a total of 430,000 accounts as it keeps rising in popularity, despite having seen various governance issues.

Not a lot of news this week, but the news that came out was exciting. Circle CEO, Jeremy Allaire, spoke about global cryptocurrency industry regulations during a recent interview in London. According to Allaire, regulations are needed to grow the market.

While industry regulations might be needed to further grow the crypto space, another catalyst for growth is around the corner. The Intercontinental Exchange (ICE), will list and enable trading of the new Bakkt Bitcoin (USD) Daily Futures Contract on December 12, 2018. Last year, similar news initiated the rally that eventually let Bitcoin hit a new all-time high of $19,783. Is a new bull run about the happen?

Last but not least, EOS investors had a reason for a small celebration: the EOS network has recently seen its amount of unique daily users surge by 500%, helping it reach a 60,000 unique daily user milestone. HUGE! 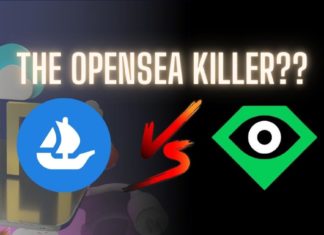 Aidan - January 14, 2022 0
The NFT community has been hollering for an OpenSea token, as well as a functioning marketplace, since its inception. The site is constantly down,...