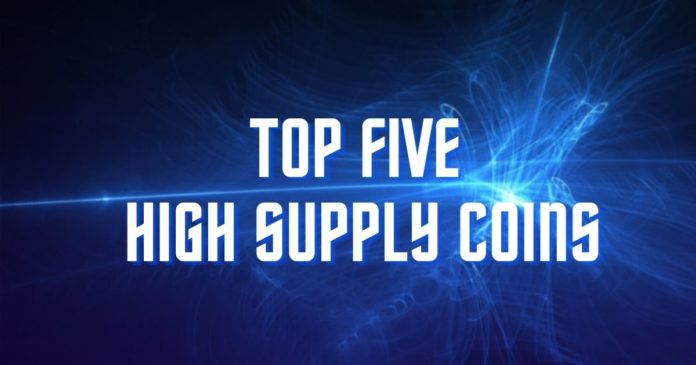 The finite supply of 21 million bitcoins is approaching an end, pushing the digital asset’s price higher and making it difficult to buy. Several crypto-based projects followed the lead of the world’s first cryptocurrency and kept a low volume of their native tokens. While most cryptocurrencies have a low and finite supply, some coins have a large, or even an infinite, supply to keep the price stable or for other reasons. This article highlights the top five cryptocurrencies with high volume and discusses their protocols.

The top high supply coins that sparked our interest are:

History: Jed McCaleb, in association with Charles Larsen, built XRP in 2011 on the concept of Ripple coin that dates back to 2004. While most people confuse XRP with Ripple, these two are poles apart. XRP is the native cryptocurrency for products developed by Ripple Labs used for payment settlement, asset exchange, and remittance systems.

Consensus Mechanism: Ripple uses a unique distributed consensus mechanism to validate XRP transactions, making the cryptocurrency much faster and efficient than its competitors.

Total Supply: Unlike Bitcoin that uses proof-of-work (PoW) to mine new coins, XRP is issued by Ripple Labs at a rate predetermined by its executives. While the total supply of XRP is 100 billion, over 35.11 billion tokens are in circulation, with a market cap of roughly $50 billion.

Opinion: XRP has grabbed headlines ever since its inception for not-so-good reasons. First, the dispute between both founders resulted in McCaleb leaving the company. Second, Charles Larsen holds enough XRP tokens that put him in the fifth position in the list of Forbes world’s richest people. Then, the supply gap between what’s reported and what is researched. Lastly, the SEC hammer that continues to strike on Ripple Labs to date. Though XRP is a popular currency, it is still the most controversial cryptocurrency of the space.

History: Bram Cohen designed the protocol of BitTorrent in 2001 in response to slow peer-to-peer services. In 2018, Justin Sun, the founder of Tron, bought BitTorrent for $140 million. The goal of Sun was to build a truly decentralized internet. At the center of its ecosystem lies the BTT token, which a user can utilize to share or download files from BitTorrent.

Consensus Mechanism: BitTorrent is a TRC-10 token that runs on the Tron blockchain that uses a delegated proof-of-stake (DPoS). It means anyone involved in building blocks on the network must hold a stake in TRON tokens. These block producers are voted on by other stakers.

Total Supply: BTT has a total supply of over 990 billion, of which 660 billion tokens are in circulation with a market cap of $2.87 billion.

Opinion: BTT tokens contribute to improving the BitTorrent ecosystem while offering users a way to earn money through staking. Besides, the Tron blockchain is scalable and is reasonable in terms of fees. However, Justin Sun, the brain behind Tron, is often accused of stealing Ethereum’s code and white paper.

History: Holochain is a peer-to-peer platform designed by Arthus Brock and Eric Harris Braun in 2016. It was built with the aim to host decentralized applications and serve as a bridge between the internet and applications.

Consensus Mechanism: The HOT token does not rely on any global consensus. Instead, each dApp built on its network has its own set of rules to validate transactions and secure the platform. Moreover, it has a local hash chain that stores cryptographically-signed data.

Total Supply: While the maximum supply of tokens is not available, over 177 billion HOTs are in circulation, with a live market cap of around $1.41 billion.

Opinion: Despite launching its ICO in the 2018 bear market, HOT investors observed a 500% increase in the token value. It proves the platform has the necessary potential. While there is no certainty if Holochain will be successful, it is ready for use, and developers are already building on it.

History: Developed by David Yu in 2020, ECOMI is one of the top-rated non-fungible token (NFT) marketplaces. The platform enables users to purchase, protect, and collect premium licensed digital collectibles using the blockchain. It consists of the VeVe marketplace and the ECOMI wallet.

Consensus Mechanism: Ecomi’s VeVe platform uses the GoChain network that uses a proof-of-reputation (PoR) algorithm. The PoR mechanism secures the ecosystem with the promises of large corporations behind GoChain.

Total Supply: OMI is the native token of ECOMI. It has the maximum supply of 750 billion tokens and over 189 billion OMIs are in circulation, with a market cap of over $670 million.

Opinion: The ongoing mania of NFTs makes Ecomi a go-to blockchain-based system to get collectibles. If the project can get some decent licensing deals, for example, with Pokemon or others, it will grow for sure.

Consensus Mechanism: STMX, the native token of StormX, is secured by a proof-of-stake consensus mechanism.

Total Supply: STMX has a maximum supply of 10 billion. Over 8.52 billion tokens are in circulation with a current market cap of approximately $224 million.

Opinion: StormX aims to boost up the freelancing industry, which is the current craze of the working industry due to the onset of Covid-19. With a solid team behind the project, it is poised to grow in value.

The high volume coins are a great way to enter the crypto market because of their low price. Some of the coins listed above have given massive returns to investors. However, it is easy to get rekt in the crypto space because it is highly volatile, and it is nearly impossible to time the market. So DYOR before putting your money in any of these tokens. 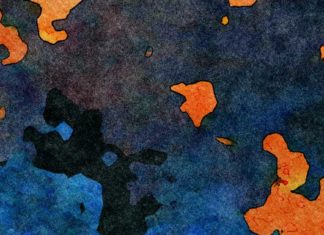 AlterVerse Gets New Funding From Binance