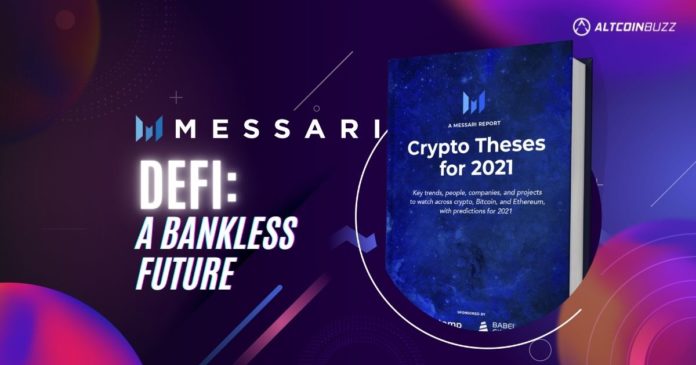 Messari is a very famous crypto research company. This platform gives its users a complete pack of analysis tools for web3, NFTs, and social tokens. Therefore, this company gives a summarized report at the end of every year.

In this case, we will talk about one of the sections of this report: DeFi. We know that this sector has had many developments so that you can discover which protocols has change the sector in 2021.

5 Definitions Around Messari’s Concept About DeFi

Several protocols have emerged in the ecosystem, calling themselves DeFi tokens, even if they weren’t. Therefore, Messari has established five requirements standards that every DeFi protocol must have:

Considering these concepts, Messari has explained in simple words the 10 DeFi protocols that will be protagonists in 2022:

The problem, of course, was that ETH fell by more than 90% from its high to trough in 2018. As a result, the disadvantages of leverage were immediately recognized. Once the collateral value declined to $625k, the $1 million long ETH CDP would have been liquidated (with a cost).

Maker still has its detractors, but Messari currently considers it the industry’s most durable and crypto-collateralized solid bank. More significantly, the proof points out that other on-chain stablecoin initiatives may generate crypto dollars that allow avoiding using traditional banks completely.

It’s important to mention that DAI’s market cap increased by 15 times by 2020, mainly owing to DeFi. By 2021, the protocol ended with more than $16 billion in TVL as more synthetic stablecoins entered the race.

Messari considers that the backbone of current crypto exchanges, central limit order books (“CLOBs”), usually perform well with centralized exchanges. However, the CLOB concept breaks down when it is introduced on-chain.

As a result, some projects are developing layer two solutions to these difficulties using on-chain order books, but for now, know that managing an order book on-chain is costly. This is when Uniswap enters the picture.

Uniswap is a decentralized exchange with an “automatic market maker” (AMM) at its core. Vitalik presented the idea in late 2016, and Bancor pioneered it in mid-2017, but Uniswap made it ubiquitous.

According to the report, Bitcoin climbs the currency leaderboard as other currencies weaken and inflate. Uniswap is a “poor exchange” compared to Binance and Coinbase, though even that is debatable these days, but an excellent exchange for long-tail assets and when compared to centralized exchanges outside of the top 50 trading volume.

On the other hand, most market liquidity will move through decentralized exchanges in the future, and AMMs will be an essential part of that story. Even better, AMMs ensure that retail investors will consistently outperform institutions and venture capitalists in the game of crypto value generation. Uniswap is expected to remain in the top ten exchanges.

When Compound announced “liquidity mining,” they ushered in a whole new era in the DeFi industry. Therefore, liquidity mining created an enticement for early DeFi participants by providing tokens with network governance privileges to the early liquidity pools’ financial donors, also known as “yield farmers.” Here is a summary of it: 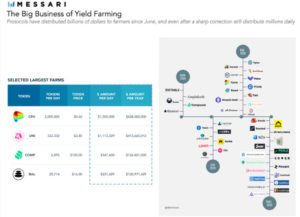 Therefore, since its June inception, Compound deposits have risen 15 times, and liquidity mining awards will be given over four years. Liquidity mining awards, on the other hand, should continue to assist users in speculating on their marketplaces’ long-term growth and helping them get off zero.

Curve is one of the most intriguing new AMMs to hit the market. This platform introduced USDC and USDT, where DAI markets were made 10x more liquid for DeFi. 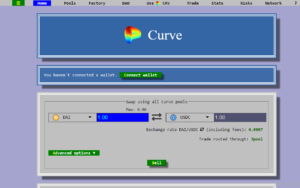 Its native token, $CRV, was one of the most significant breakthroughs of the year. As platform interoperability improves, the relevance of scaling liquidity for like-asset trading pairings will become even more apparent.

Yearn Finance wins the award for best DeFi protocol of the year for bringing all of DeFi’s protocols together. Yearn’s precursor, iEarn, began as an interest rate optimizer that dynamically deployed assets among several DeFi lending protocols based on the most significant daily yield.

The “flash loan,” which allows a user to borrow an asset, deploy it in a transaction, and then return the loan in a single multi-step transaction, is one of the most intriguing new DeFi initiatives.

Therefore, AAVE is considered one of the initial originators of flash loans. This is essentially a sequence of consecutive database entries that only run if they are process in a single batch operation.

The middleware that connects blockchains to off-chain data sources is called oracles, where Chainlink has highlighted. Its system employs a “designated reporter” system to reward oracles that provide correct information about real-world occurrences.

Chainlink collects data from various sources and acts as a data translator for crypto transactions without involving trusted third parties. Given the project’s hundreds of integrations with crypto projects, Chainlink has become the top project most people think of when they hear about oracles. Here is a chart that shows the number of integrations: 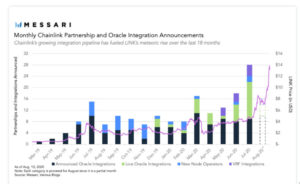 On the other hand, $LINK is an asset that it’s now worth $5 billion in liquid float, with 60% of the remaining supply kept in reserves to reward partners and capitalize the protocol’s primary contributors.

We all know that security is an important issue in DeFi, where developers can fork open-source code from any protocol. Here are some examples:

On the other hand, there are DeFi programs that didn’t pass through an audit process. The result? Bugs get into DeFi’s smart contracts. However, there are currently instruments for assessing risk in individual projects that set a bounty to incentive developers to help them find and fix bugs.

Finally, in DeFi, there are different approaches to construct defensibility: Branding, integrations, usability, goodwill, collaborations, and adequate security are all crucial. A strong treasury strategy, on the other hand, is essential.

With $6 billion in community-governed tokens and hundreds of millions of dollars in treasury assets, treasury governance and protocol politics are high-stakes activities in DeFi. Projects like PowerPool (a proxy service for gathering DeFi voting power) and Aragon (the first DAO manager), according to the research, are critical for the niche.

Ruma - December 30, 2020 0
In our previous article, we have explained how you can create a new account on the Binance exchange, deposit and withdraw crypto/fiat, transfer one...