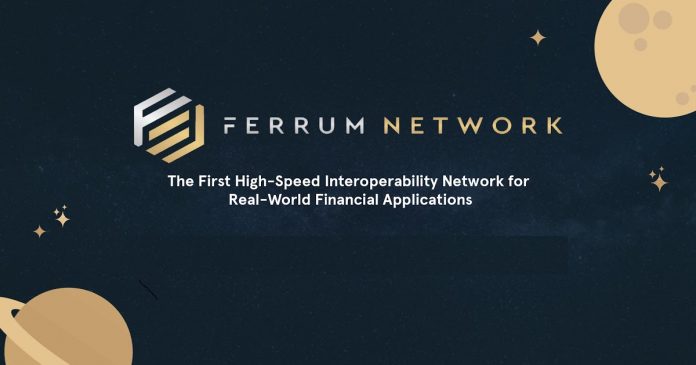 Emotions in the last two years have been a rollercoaster ride in the cryptocurrency space. Many companies were able to raise millions of dollars in the value of ethereum and bitcoin. Some were scams, others were failures, and only a handful remain. The cryptocurrency community became very sensitive to companies who raised millions but were not able to deliver. Now new blockchain startups are becoming more conservative with how much money they need to raise, and one company, in particular, caught my eye and it will be the highlight of this community speaks article. The Ferrum Network raised 1 million dollars, and they already have four products coming soon. Let’s learn about The Ferrum Network.

The Ferrum Network is focused on providing high-speed interoperability for financial applications. Ferrum is a DAG-based network that aims to work like the lightning network but for every blockchain available. The goal is to empower millions of people around the world and open up new financial opportunities for people who couldn’t before. The FRM token is spent, used, burned with every transaction. Utility and real products is an area the Ferrum Network team is sure to execute correctly.

The Ferrum network is offering four products in its line. A tremendous key feature to notice about this team is that they want to deliver, something many ICO’s never did.

Their Unifyre Wallet:
The Unifyre wallet will allow you to store and transact several cryptocurrencies. It will have a unique and risk-free OTC trading feature and instant market trades. Most exchanges don’t offer an OTC feature; this will make this wallet truly one of a kind. The Unifyre wallet is connected to the Infinity DEX which will allow for instant market trades. You’ll be in control of your keys and full custody of your assets.

The Infinity Dex:
The Infinity Dex will be one of the first high-speed cross-chain decentralized DEX’s. It will give users a better experience with higher speeds, better UI, and non-custodial features that regular exchanges force on your account. One of the first DEX’s to allow margin trading for cryptocurrencies, powered by the Ferrum Network.

The Subzero Wallet:
The subzero wallet is a Mobile cold storage application that can be added into any Android device. The idea is for you to use an old Android phone you don’t use anymore and convert it into a cold digital asset wallet. Making it one of the safest ways to store your cryptocurrencies. The Subzero wallet will allow you to send your assets anywhere you want with the use of a QR code. The Ferrum Network will power these transactions, which means you pay micro fees to make this happen.

The Kudi Exchange:
The Ferrum Network will power it’s Kudi Exchange. It’s the first fully regulated African exchange that allows peer to peer transactions with a pegged stable coin. It even has a POS device to enable users to spend cryptocurrencies in person and businesses.
The Ferrum Network even has key strategic partners like the Fusion Protocol, Rivetz, Hydro, Bitmax, and Gemini. All of which are established blockchain companies. The roadmap highlights an exciting future for Ferrum and you just learned a great amount of information about this exciting company. To learn more visit their websit

This Project Can Connects All the World’s Blockchains

Deepika Garg - April 4, 2020 1
Almost a decade ago, the first distributed, decentralized and public ledger came into being. We are talking about the Bitcoin phenomenon. As it rose...

$6 Billion Worth Of Bitcoin All In One Block