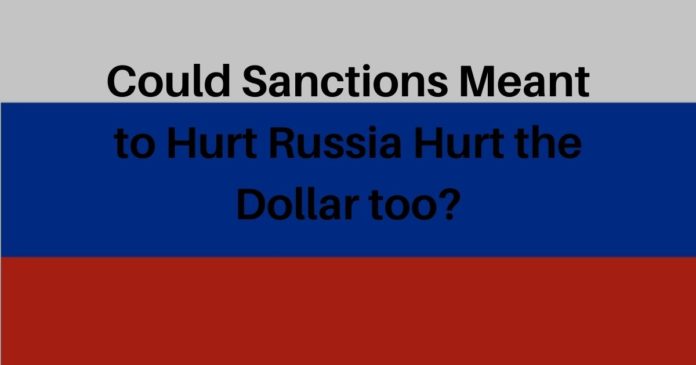 Russia. Economic sanctions. Exclusion from SWIFT. We are hearing a lot about these terms recently. The West decided that one of the fastest ways to fight against Russia and its aggression is to attack their money.

And that’s what leads us to this question of when is money not really money? These economic sanctions may help us answer this question.

Russia Blocked From Their Money

The Wall Street Journal published an article yesterday about Russia and its currency reserves. The article starts by saying that Russia, and nearly every other country, holds foreign currency reserves in other central banks. Banks like the Federal Reserve and the European Central Bank. They do so for many reasons including:

The IMF, as quoted in the article, says that countries only hold 3 asset types in these central banks.

And for most countries, 78% of their assets in other foreign banks are #1, foreign currency reserves. Including Russia. American and European blocking of central bank access means Russia can’t get to $630 billion of its own foreign reserves.

What Bitcoiners have been Saying For Years

Bitcoiners for years and years have been saying that your money in the bank really isn’t your money. In fact, it’s a liability for the bank. They have a say whether you can get to it, how much of it you can get to, and when.

Don’t believe it? Try receiving a check for $10,000 and see how long it takes before the money is yours.

Most Americans and Europeans haven’t had a transaction blocked by a bank. So they did not want to believe this was true. Then 2 things happened:

And this is the first time this kind of blockage has ever happened to a G20 nation. It’s only ever happened before to Iran and Venezuela.

What Will Russia Do Now?

Whether it was smart planning, getting lucky, or thinking they might make an invasion like this, Russia has been moving out of USD and Euros. They’ve moved into more gold and Chinese Renminbi (RMB) before the economic sanctions.

No one else can make a claim on the gold but along with high storage costs, Russia will need to sell it into an asset they can use. It’s the reason why gold is a store of value and isn’t money.

As for the RMB, this should concern everyone, Russia included. China only does what’s good for China. And the minute partnering with Russia is no good for China, they will confiscate that money. And the Russians know it too. So Russia and China may become even closer as a result of this and that should concern us all.

Again, in the ‘when is money not money’ question, if the US and EU (or China) can just confiscate and erase that foreign currency balance, then was it ever money in the first place? It sounds more like when a bank forecloses on a debt.

The WSJ says if it’s clear to Russia that forex is no longer money then they would be smart to:

By the way, Europe and the US are still buying Russian oil & gas at a pace of $20 billion per month. That’s despite these economic sanctions.

Could the Economic Sanctions Backfire on the US?

As the WSJ says, this could help China and the RMB become a global currency.

Because capital controls and the political risk of confiscation were the big reasons limiting the growth of the RMB globally. But now, all currencies have that risk. It’s not just Russia and other sanctioned countries, but other countries may want to diversify out of the dollar and hold some of that forex in RMB instead.

The libertarian Mises Institute goes a step further. They say this could lead to de-dollarization globally including by friends of the US, not just enemies. Mises expects central banks to buy more gold too.

Where Does Crypto Fit In?

The obvious first answer is that Russia will use crypto to receive payments for oil or other goods. And they could, but that also ignores how they will cash out, how they will buy other goods and how they can trade to feed their people. Most international companies don’t want crypto…..at least not yet.

It doesn’t seem related to Russia’s financial problems, but crypto has actually been great for the USD. Not just crypto generally as a proxy for dollars around the world, but stablecoins in particular. If you want to know why the US only has inflation and not a full-on depression after printing so much money, it’s that demand for dollars and their proxy (stablecoins) is high and rising around the world. Or it was before this.

A place like Turkey or Argentina with rampant inflation definitely wants Bitcoin but its active market supply is limited. So what’s the next best thing? Stablecoins. All the top coins from Tether to USD Coin to UST have been doing great and seeing huge adoption numbers worldwide.

Crypto will continue to grow regardless of whether that growth helps the dollar or not. But could this weaponizing of the dollar mean people turn to crypto and don’t ever go back to dollars? We certainly think that could happen.

These actions are a real threat to the USD’s global reserve currency status. Either they don’t see it, or they are too concerned about what Russia is doing right now to address it. Or both.

Regardless, we would look to go long crypto (obviously) and long gold too from here as more central banks are likely to be buying it and short on the USD long term. More globalization and less US power guiding the entire world is coming soon. We might as well get ready for it. 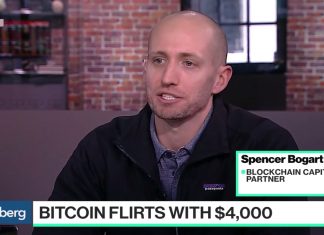 Luc Lammers - February 23, 2019 0
In an interview with Bloomberg Television, Spencer Bogart, a partner at Blockchain Capital, said that he thinks "now is a good time to buy...