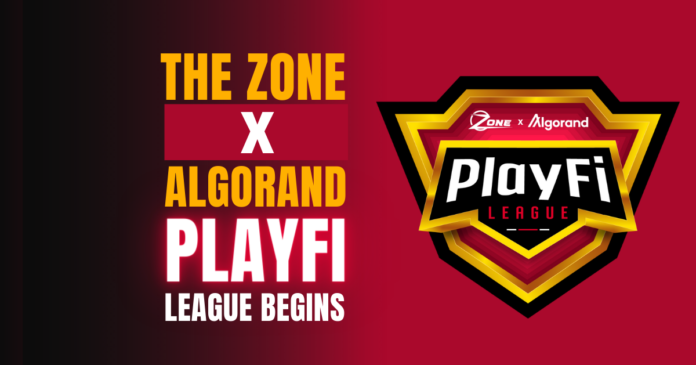 The blockchain gaming industry remains one of the most stable sectors of the market. While DeFi suffered the biggest blow from the bear market, gaming continues to be a lucrative activity, especially when done on the right platform.

The Zone X Algorand PlayFi League, an Algorand-based platform, offers one of the most intriguing ways to access to Web3 gaming. The league integrates elements of Decentralized Finance(DeFi) and gaming to bring blockchain to new frontiers.

The DeFi gaming ecosystem has made huge progress over the last couple of months. However, the industry continues to struggle with several setbacks, such as a lack of intriguing gameplay and a difficult interface. Getting a DeFi gaming project that isn’t all about making money is somewhat of a challenge.

However, The Zone X Algorand PlayFi League brings a different narrative. Unlike the money-focused approach, the league provides gamers with a chance to earn as well as enjoy a quality gaming experience. Is the first Algorand-based GameFi platform that merges the thrills of on-chain gaming, yield farming, and NFTs to build a free-to-play and play-to-earn ecosystem. Also offers non-blockchain games easy access to GameFi.

The Zone X Algorand PlayFi League has announced several partnerships and updates in recent months, all geared toward giving gamers a chance to connect, play and earn.

The gaming platform has announced the launch of the biggest Web3 gaming league in partnership with Algorand. Zone’s X Algorand PlayFi League has a prize pool of $150,000. The competition offers gamers the chance to compete for the top spot alongside other gamers, proving how thrilling Web3 gaming can be.

The Zone X Algorand PlayFi League will include new gaming titles launched. Some of them are live, while others are yet to launch on the platform. Some of the games available in the league include:

The league commences on the 18th of November and will last for 35 days. These 35 days promise to witness non-stop gaming activities, constant rewards for gamers, and daily tournaments. The Zone X Algorand PlayFi League isn’t any regular gaming competition. It is a once-in-a-lifetime opportunity for gamers to make the most of their passion.

What is Needed to Participate?

Gamers must hold the Zone Game Pass NFT to participate in the league. The game pass is more like a ticket to play the game and access current and future rewards. Fortunately, the Game Pass is free but limited. So, only super-fast players can get them. So, no game pass, no rewards.

Passes are available to mint on Zone. The platform releases a limited supply of the  Gamepass daily at 12 PM UTC. Players just have to connect their wallet to Zone and click on the option “Get your Game pass.” Zone released 4,000 passes for today.

😬Only 4,000 Game Pass NFTs can be claimed today!
⚡️You Snooze, You Lose #algofam, get them before they are gone!
Claim now at https://t.co/Okk2kOmcTJ pic.twitter.com/8tAZJ7dutW

Zone plans to make this as flexible as possible. So users who miss the daily release can purchase them on secondary marketplaces.

Players who get their hands on the Zone Game Pass and make it into the league will be ranked on the Zone x Algorand PlayFi Leaderboard. Their points from all the games played will be tallied and displayed. Gamers can track their performance and the competition using the leaderboard. As said earlier, only the best hands win.

The tournament will run in two phases. The first pool will run for 28 days. There, players can play and earn daily rewards. Players will receive rewards for their performance in each of the 8 games.

The top 100 players from each game in phase 1 will qualify and participate in phase 2, which will serve as the grand finale. It will run for 7 days. The winner’s prize will go to the top rankers at the end of the tournament.

The league will feature top pros from across the world. So, The Zone X Algorand PlayFi League isn’t about gaming alone. It is a time to network, flaunt skills, and earn a fantastic income.