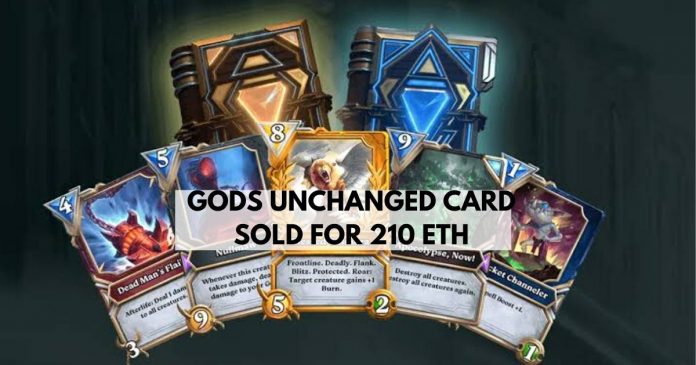 Card games based on decentralized technology are becoming increasingly popular among crypto lovers. And it looks like Gods Unchained cards are specifically attractive.

The game has been in the spotlight for all the right reasons. Thus, it is no wonder that players are ready to spend a stupendous amount of money on cards. In fact, as much as 210 ETH (app. $30,650). That’s the cost of the “Mythic” card, which was sold this week during an auction.

The sale was confirmed by a tweet from OpenSea. It reads: “Gods almighty! A “Mythic” @GodsUnchained card just sold for 210 ETH ($31k) in an OpenSea auction. Bidding started at 165 ETH, and ratcheted up in the last few minutes of the auction.”

Gods almighty! A "Mythic" @GodsUnchained card just sold for 210 ETH ($31k) in an OpenSea auction. Bidding started at 165 ETH, and ratcheted up in the last few minutes of the auction.https://t.co/rSx3qobz1B

This card is of very high-quality. It is also a very rare one. This is the second time Gods Unchained card will be auctioned for thousands of dollars. The first was the Hyperion. It was sold for 138 ETH (app. $62,000) during the presale last year.

Subsequently, the card’s seller disclosed that he was very pleased with the outcome of the auction. When asked how he planned to spend the money, he said, “Bills. I’m a normal dude. Need a new roof and furnace.”

Gods Unchained is a competitive trading card game. Players try to win by defeating their opponent and reducing their health to zero. Prior to starting the game, a player has to choose his deck and one of the free god power cards. Players can also draw three random cards during the game. Gods Unchanged cards are created on the Ethereum blockchain.

The game has five card types, namely Common, Rare, Epic, Legendary and Mythic. Mythic is one of the rarest of collectible cards. With about 6.8 million cards in existence, there’s only one count of each Mythic card printed. The seller disclosed that he got his card during the initial sale of Gods Unchained.

The game also recently raised $15 million in funds for marketing and development.

Chris Perrotta - January 22, 2019 0
In “This was the NEWS” we take a look at the most important news of last week. What has happened in the crypto space...