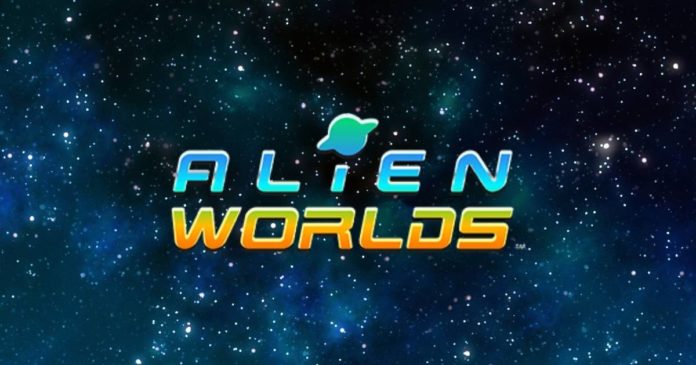 Blockchain gaming has grown in popularity and actively competes against traditional gaming. While the crypto market appeared to have suffered a major setback in January, the gaming sector remained stable. In addition, statistics have proven that blockchain gaming has a huge level of global adoption.

The rise of the play-to-earn gaming model is hugely responsible for the large numbers of people flocking into the blockchain gaming world. Also, games like Axie Infinity have become the new destination for players seeking to earn while having fun. In addition, Alien Worlds is another game drawing attention. This article will explore how to set up and play Alien Worlds, including other details such as cost.

What Is Alien Worlds?

Alien Worlds is a leading free-to-play game in which users take on the role of a space explorer. Also, players start the game with three mining tools that they can deploy to mine planets. Mining is a huge part of the game. In addition, earning from Alien Worlds is a pretty easy task. Furthermore, the minerals mined represent the game’s version of cryptocurrency. Players get to decide the planet they want to explore and begin mining Trillium (TLM).

The Trillium token is a huge part of the game. Also, Alien Worlds rewards players with Trillium (TLM), and the quantity of TLM players get is determined by several factors. These factors include:

Mining TLM should take between 2-3 seconds. Sometimes, it could take up to 2-3 minutes. A player’s equipment and the planet they mine on will determine the time spent.  Furthermore, gamers can use the TLM to acquire NFTs and access planets in the game.

How Is the Game Played?

Players must first create a WAX.io wallet before they can begin playing Alien Worlds. WAX.io is one of the most well-known decentralized gaming networks. Furthermore, WAX.io is a wallet dedicated only to NFTs. The wallet is simple to construct. In addition, players only need to link the wallet to a Twitter, Facebook, or Google account to get started. 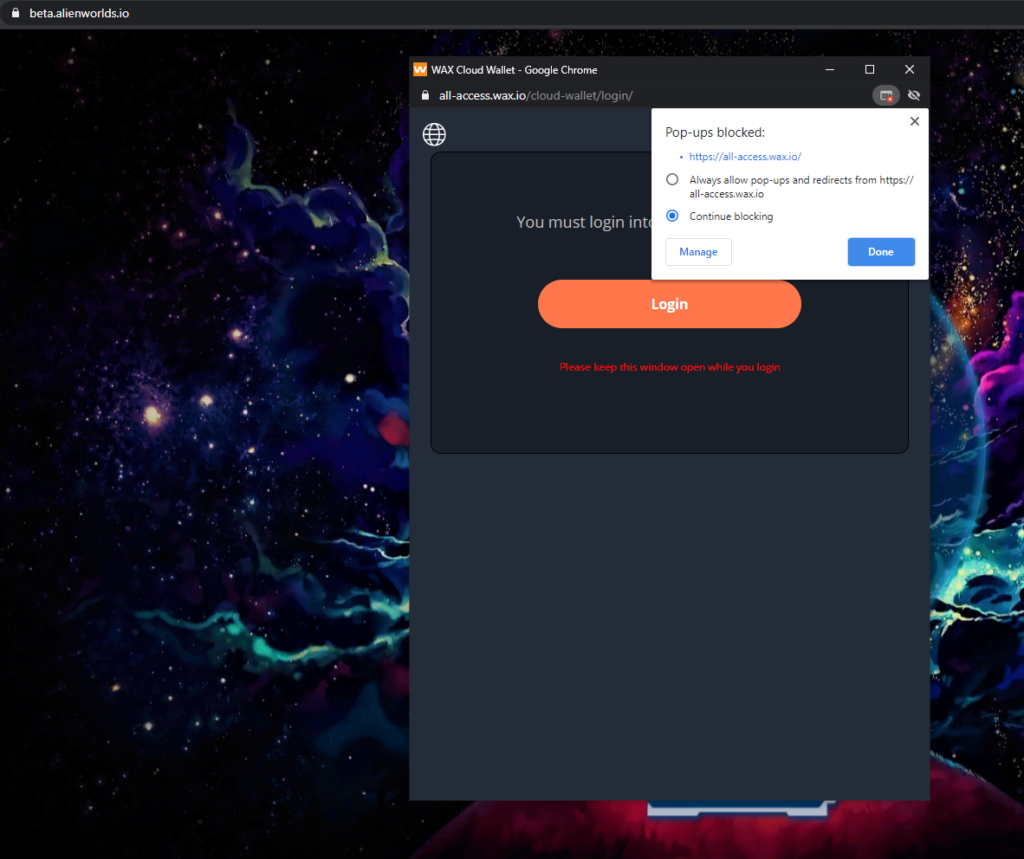 Setting up on Aliens Worlds

After they’ve logged in successfully, players will need to set up their accounts. 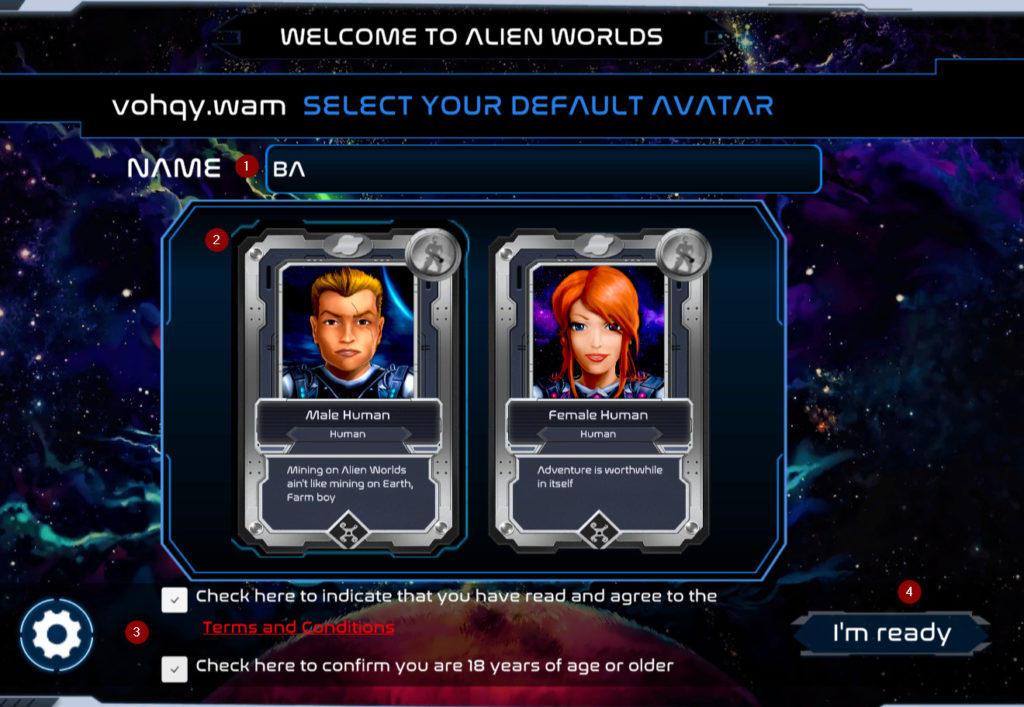 After setting up their account, users will need to pick a planet to mine on. Also, players have the liberty to choose their planet. For example, Planet Naron is used in this article. The current mining pot shows the amount of TLM (Trillium) that may be mined from this planet. Furthermore, the fill rate is the speed at which the TLM is supplied. 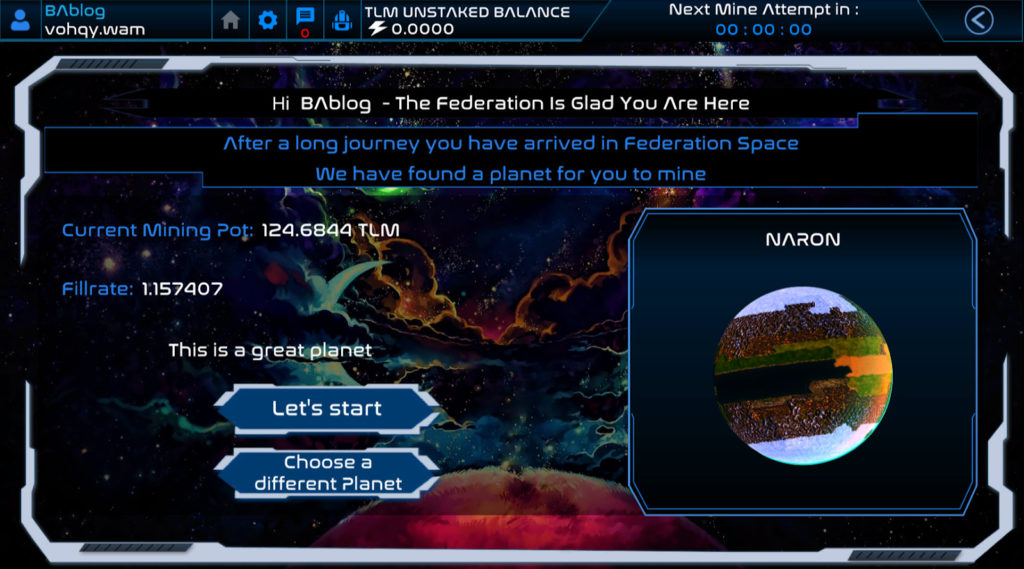 After selecting a planet, the next task is to select a mining land. Additionally, the land is an NFT in Alien Worlds that symbolizes the components of a planet. In the game, players can own lands where they can mine. In addition, a user can allow other gamers to mine on their land for free.

Things to Note Before Selecting a Land

Lands are an important aspect of the game. As a result, players need accurate information before selecting their land. Here are some things to know:

Gamers can decide to select the land chosen by the game by clicking on “Sounds Good.” They can also choose specified coordinates by clicking “I want to choose where I mine.”

Players will be sent to the mining hub after selecting a land. Furthermore, the hub displays their land as well as up to three usable tools. For a start, the game will give players a standard shovel as their tool to begin mining.

To add the shovel, users would have to click the + sign in one of the tool rows. 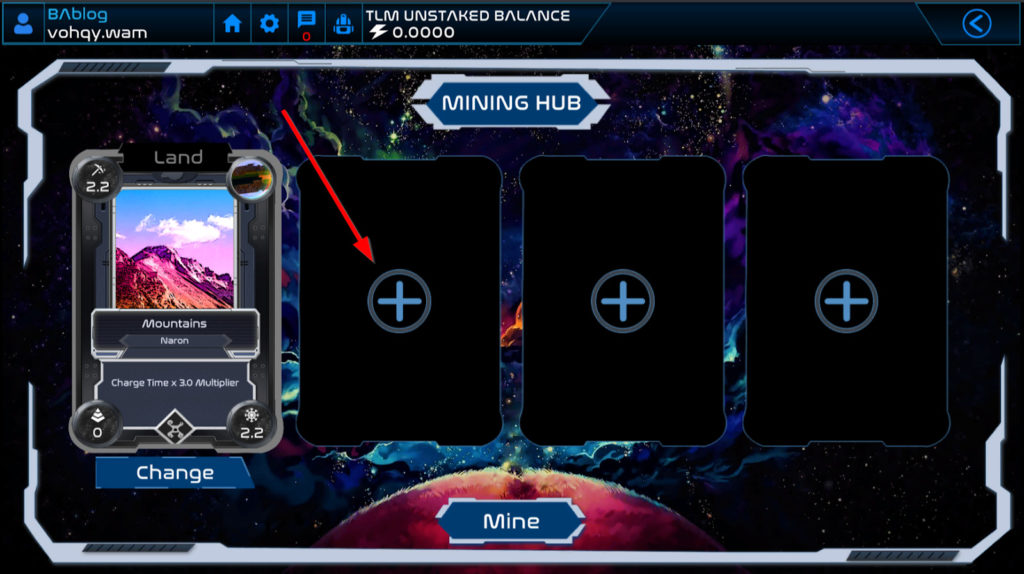 To select the shovel, users will click “Equip.” The color will change to green to indicate its changed status. Players can select the back symbol to return to the mining hub. 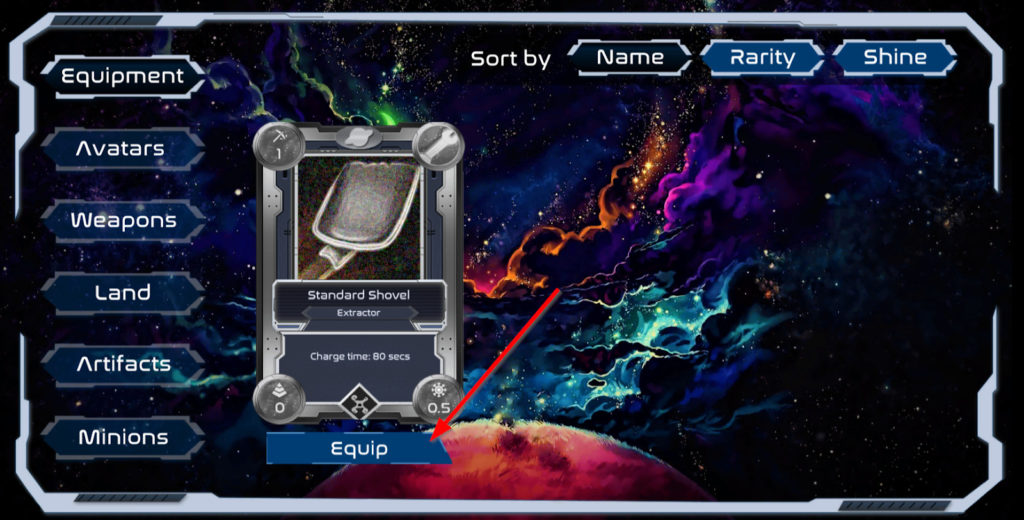 After selecting their land and having a mining tool, users will begin mining. Furthermore, players can get better tools to their hubs, increasing their TLM yield. Additionally, it gives them an upper hand in finding more NFTs. 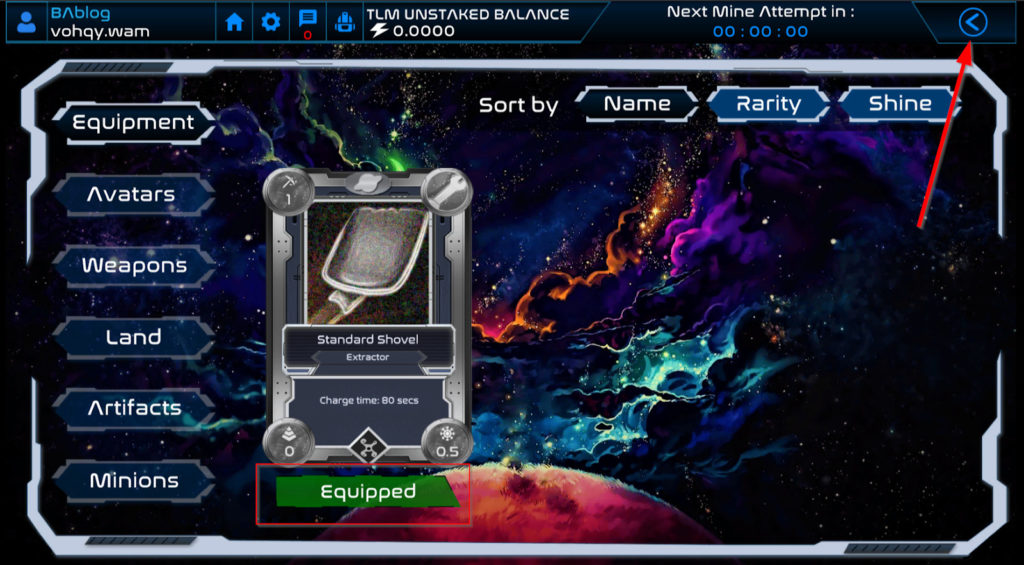 Mining is a key part of Alien Worlds. It involves two key aspects: mining and allowing the tools to recharge. In addition, players can click the Mine button and follow the on-screen instructions to mine. Again, the game will give them TLM as a payment. Furthermore, a timer will appear in the top right corner of the screen. However, players won’t be able to mine until the clock runs out. 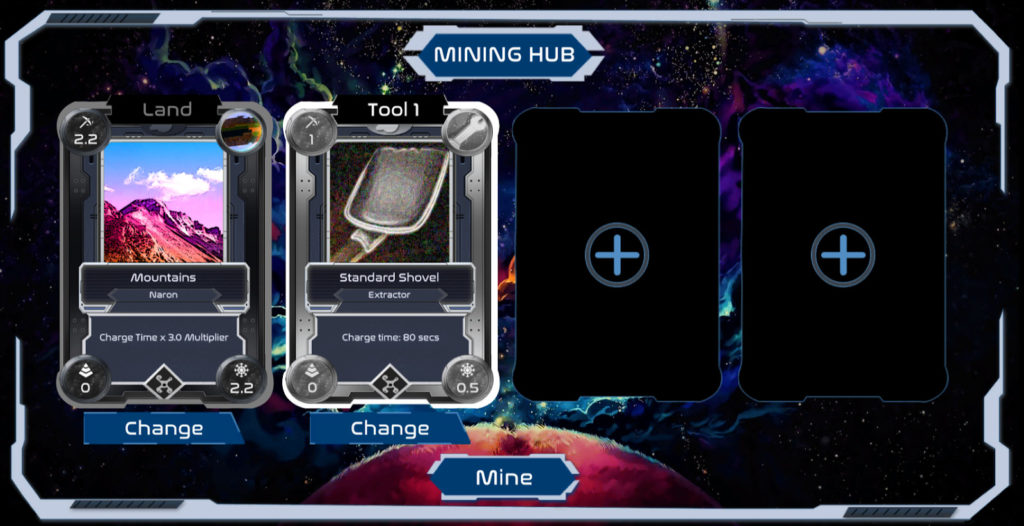 The claim screen will pop up once mining is completed. Users can view their mined TLM by clicking the “claim” button.

Users can find more information about their TLM, cooldown, and other details. Furthermore, users can click the “mining hub” option to return to the mining hub. 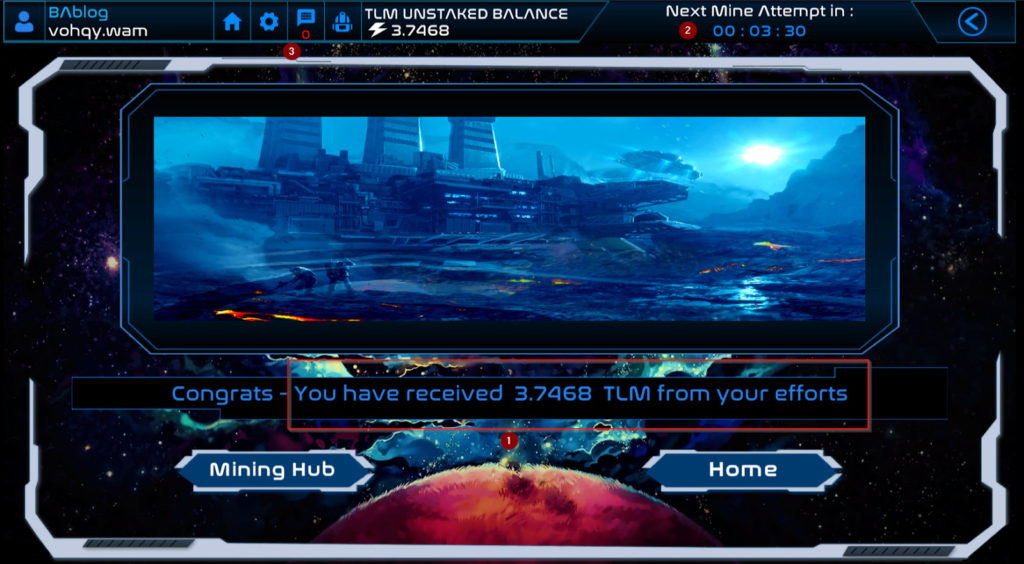 What Does It Cost to Play the Game?

Playing Alien Worlds has no financial barriers. Entry is free. Users only have to set up a WAX wallet, which is free.

Gamers use NFTs called “minions” in combat. The minions that lose the combat will lose energy and require treatment at the Federation Hospital.

Weapons are NFTs that minions can use in battle. Also, each weapon has a rating for assault and defense. In conclusion, gamers have to repair damaged weapons in the Weapon Repair Shop before using them for battle again.

Finally, players can get more details on Alien Worlds’ website. 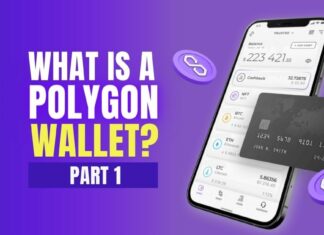 What Is a Polygon Wallet? Part 1

Camille Lemmens - November 17, 2022 0
Polygon is currently one of the hottest blockchains around. They keep partnering with one amazing project after the other. For example, Disney, Starbucks, Meta,...