Privacy-centric cryptocurrency Verge (XVG) appears to have succumbed to a 51 percent attack for the second time this quarter. Is the end nearing for Verge?

Small recap: on April 4, 2018, the Verge network was taken over by a so-called 51% attack. This means that a group or person has received more than 50% of the computing power of the network in its possession. Because of this bugs could be exploited, allowing 1 block per second to be mined.

As a result, for many hours the hacker could steal away all the block rewards and run off with approximately 20 million XVG, worth more than $1.1 million at the time.

The Verge team tweeted after the attack:

We had a small hash attack that lasted about 3 hours earlier this morning, it's been cleared up now. We will be implementing even more redundancy checks for things of this nature in the future! $XVG #vergefam

Because of the attack, on the 8th of April Verge forked to prevent the attack from happening again. The problems for Verge seemed solved. That said, the attack did raise a few eyebrows. How could this have happened? And why did it took several days before the bug was resolved, a bug that was only discovered after tips from people outside of the Verge team?

A lot of red flags for a lot of crypto investors indicating that it might be best not to invest in Verge for a while. Also because the Verge developers downplayed the severity of the exploit.

Yesterday the news came out that verge again has been damaged by another mining attack. According to data published on BitcoinTalk by forum user ‘ocminer’, an attacker appears to have successfully forked the Verge blockchain through a 51 percent attack. Yesterday’s attack is very similar to the attack that happened in April. The hacker manipulated a bug in the Verge code that allows malicious miners to set false timestamps on blocks and then rapidly mine new ones in quick succession.

The damage: according to the last data, the hacker was coining $1,000 a minute and is believed to have made over $1.7 million from the attack. Looking at the damage, it is quite clear that the hack is the result of an incompetent team that did a bad job fixing the previous hack.

In regards to Verge and the quality of the team behind it, ocminer summarized it perfectly! Ocminer wrote:

“Since nothing really was done about the previous attacks (only a band-aid), the attackers now simply use two algos to fork the chain for their own use and are gaining millions”

Meanwhile, the response from the Verge team is mind-boggling:

it appears some mining pools are under ddos attack, and we are experiencing a delay in our blocks, we are working to resolve this.

It is striking to see that even with these kinds of attacks, the official Verge team is not giving a lot of information on what is going on. In the meantime, the price of XVG has dropped significantly since the attack came to light. 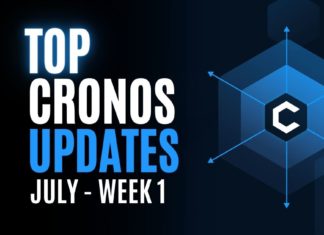 David Abel - July 6, 2022 0
There are new updates taking place weekly in the Cronos Chain ecosystem. Thus, Altcoin Buzz covers the updates from the first week in July to...