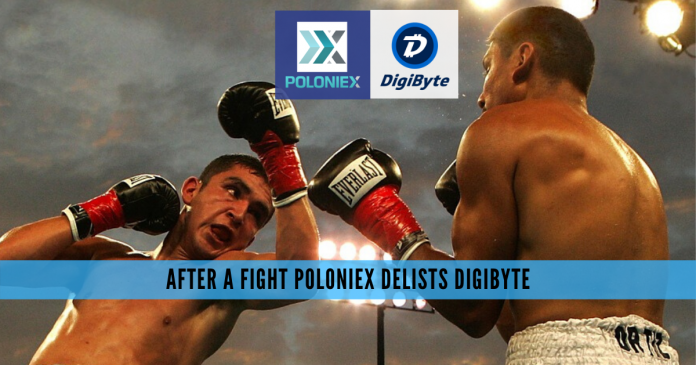 Digibyte founder Jared Tate seems to be waging a war against Poloniex and Tron. And Poloniex is striking back. The exchange announced that it will delist Digibyte shortly.

According to Digibyte supporters, Poloniex decided to delist the coin for purely emotional reasons. They posit that there are no technical grounds for it. Moreover, the exchange seems to contradict the statement of its cryptography expert. He stated that DGB is apparently “More secure than Bitcoin.”

"More secure than Bitcoin" according to the Poloniex cryptography expert is reason for delisting these days, gotcha.
Centralized 100% pre-mine, is totally OK though, guess we don't fit that bill. The joys of being a truly decentralized project like this crypto space wanted eh?! pic.twitter.com/49MnkFv3f2

Digibyte proponents are now planning to return the fire. They aim to stop trading on Poloniex (at press time, DGB is still available on it).

After careful review, we’ve decided #Poloniex is not qualified to trade on.

You have many other options. Literally anything but poloniex.$DGB https://t.co/h1EB9nZPgn

Digibyte CEO Jared Tate attacked Poloniex by calling it a propagator of Tron. The latter, as per Tate, is the most blatant con blockchain project. After a series of denials, Tron CEO Justin Sun accepted he invested in the exchange.

1/8 Im disgusted by all these #TRON trolls/bots attacking me & hyping a 100% premined & completely centralized network like its the most decentralized gift from god. Now #Poloniex has turned into a $TRX shill factory after making off w/ US customers sensitive data. Fact time:

Other than that Tate also accused the exchange of selling US Customer data to China after its spin-off from Circle.

Why such bitterness against Tron and Poloniex?

The feud is everything but accidental.

Earlier, Tate and the former FBI counterterrorism analyst Andrew Knapp decided to test the veracity of crypto/blockchain projects’ claims. While compiling their exhaustive guide Blockchain 2035, Tate and Knapp examined hundreds of blockchain projects. The tentative conclusions are not flattering for some of them. Specifically, for Tron, which has been apparently misleading the community by impersonating a decentralized platform. Accordingly, Tate states that he purportedly has data to prove it.

According to Tate, 100% of the TRX is pre-mined. And is excessively centralized. Besides, he states that Tron CEO Justin Sun and Tron Foundation controls most of the 27 nodes which control TRX. This concurs with the reason stated by Tron CTO Lucien Chen when he left the project earlier this year.

However, that’s not all. According to Tate, Binance controls 56% of the Tron voting power. Consequently, Justin Sun and Binance CEO CZ allegedly control 25/27 nodes of the Tron Network.

Recently the exchange announced a spin-off from its parent company Circle. Following the exit, it banned US traders. Some suspect that there is something nasty happening. Particularly, to the information that Poloniex possesses.

If we are to believe Poloniex, the US trader data is still owned and preserved by Circle. However, Circle has warned Poloniex US customers to withdraw their assets. Failing to do so the unclaimed assets would be handed over to state government.
It is noteworthy that back in September Altcoin Buzz published an article entitled “Cryptocommunity is Wary of Poloniex. Smell Trouble.” The readers’ feedback has shown that there is indeed a certain feeling of antipathy toward it.
Do let us know your views in the comment section below.
Earlier, we covered Digibyte’s major blockchain update. 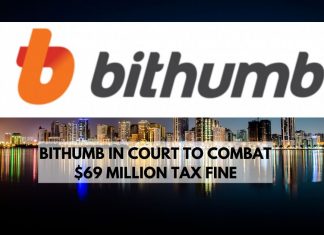 Bithumb is Saying NO to Korea’s National Tax Service $69 Million...

Racheal - January 19, 2020 0
The Korea based crypto exchange has announced that it will be battling the NTS's $69 million tax fine levied against it. According to reports,...