French Finance minister Bruno Le Maire, who drastically changed his attitude towards both cryptocurrency and blockchain at the beginning of spring, believes he had been “a rookie.” He now wants France to be on the forefront of “blockchain and crypto-active innovation in the EU”, reports Bitcoinist.com.

The site draws a tweet by Alexandre Stachtchenko, the president of the association created by the merger of two French blockchain startups, Blockchain France and Blockchain Lan, and co-founder of Blockchain Partner who shared Le Maire’s confession:

“I was a rookie a year ago, but now I’m passionate. It took me a year. Let us enlighten our fellow citizens and make France the first place of blockchain and crypto-active innovation in the EU.”

Answering CryptoFrench’s question regarding the information’s source, Stachtchenko emphasized that it is first hand, as “he had  breakfast this morning with Le Maire.” During it, the French Finance Minister also brought up several crucial issues which the cryptocurrency currently faces in France, most prominently “cryptocurrency taxation, accounting treatment, legal frameworks for ICOs.”

Le Maire, a big shot in French politics representing the ruling party “En Marche” headed by the current French President Emmanuel Macron, assured that the French blockchain and crypto industry has his “total and determined support.”

The change is drastic: Just a year ago Le Maire emphasized that “we want a stable economy”, stressing that bitcoin is used for speculations. He even offered the host of G20 2018 in Buenos Aires, Mauricio Macri, to bring up the risks of cryptocurrencies at the high-profile conference scheduled for November 2018.

Yet following the First G20 Meeting of Finance Ministers and Central Bank Governors, he emerged as one of its greatest supporters, pointing out the benefits of blockchain. Later on, he stated: “France has every interest in becoming the first major financial center to propose an ad hoc legislative framework that will allow companies initiating an ICO to demonstrate their seriousness to potential investors.”

Le Maire’s ambitions are followed by the recent news that France has slashed taxes on cryptocurrency.

“The digital currency has been considered by the country’s tax officials to be a commercial and industrial property since 2014 and, as such, administered a capital gains tax of 45% on its sale. After a fair amount of backlash and continued community support, that amount has now been lowered to a flat rate of 19%,” writes CoinGeek.

According to Cryptocoinspy, Le Maire does “not favor the suggestion that cryptocurrencies could be taxed along the same lines as precious metals. Instead, he prefers a more stable new structure whereby ICOs and investors could plan for the long run. He also suggested that transactions within the cryptocurrency ecosystem might only be taxed if they were converted to fiat currency.”

The source also says that Le Maire plans to bring up these subjects “over the summer before including a new framework in September’s Finance Bill.” 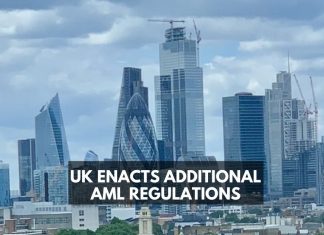 Daniel Abel - March 11, 2020 0
The United Kingdom’s finance and economics department has announced the addition of new Anti-Money Laundering (AML) regulations. According to the announcement, the new AML regulation...

Hell’s Kitchen Enters the Metaverse in The Sandbox