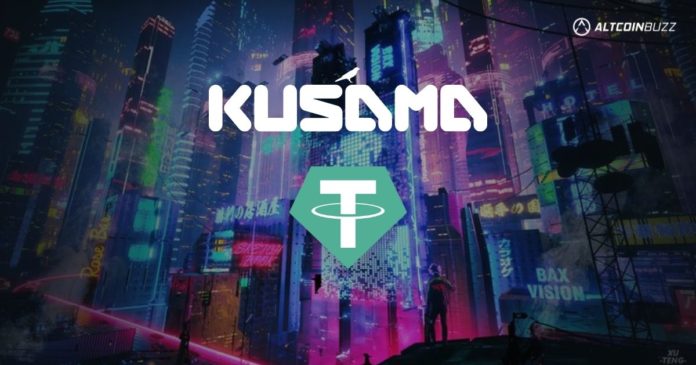 Kusama has been having great success in recent weeks. Its native token, KSM, has grown its marketcap by 36.4% in the last 30 days, and its ecosystem has also received a lot of initiatives.

However, this growth won’t be compared to what is coming next for Kusama. The entry of Tether to the “Polkadot’s cousin” will boost the liquidity and variety of DeFi and trading services to its ecosystem. Therefore, in this article, you will discover how important is this milestone for Kusama.

On April 13th, Tether Operation Limited announced that the stablecoin will be launched on Kusama. To do it, they will use the Statemine parachain. Parachains are parallel blockchains that run independently on Polkadot’s network. In this case, Statemine is one of them.

In addition, the reason why Tether chose Statemine is that it is a parachain designed to keep updated balances of thousands of tokens at the same time. Also, this parachain lets can deploy assets, from NFTs to stablecoins, in Kusama. Therefore, users will have lower fees with a more secure and scalable environment.

When Tether enters a new blockchain-like Kusama, DeFi dApps will give their users optimized services. This is caused by Tether’s liquidity, which is the biggest in the crypto ecosystem. Also, developers will be able to build trustless cross-chain dApps and robust communities.

More About Tether and Kusama

Paolo Ardoino, CTO at Tether, said: “We’re excited to launch USD₮ on Kusama, offering its community access to the most liquid, stable, and trusted stablecoin in the digital token space.”

Also, he said: “For those who believe in the importance of decentralized, permissionless ecosystems, Kusama is a perfect representation of that ethos. It is a platform built to put the control in the hands of its users and we are looking forward to becoming an essential asset in its growing ecosystem.”

On the other hand, Karura, Turing, and Pichiu won the slots 29,30, and 31 respectively from Kusama’s auctions. Also, Kusama will have support for NFTs via XCMv3.

It's been an eventful month for Polkadot and @kusamanetwork! Check out our new videos, get updates on auctions and events, and keep tabs on all things governance from passed referenda to motions in Polkadot's April newsletter.https://t.co/2UjOeODAVm

Finally, this goal definitely makes Tether continue being the stablecoin leader as the most widely adopted. With this alliance, Tether is in 8 blockchains: Algorand, Bitcoin Cash, and EOS, among others.