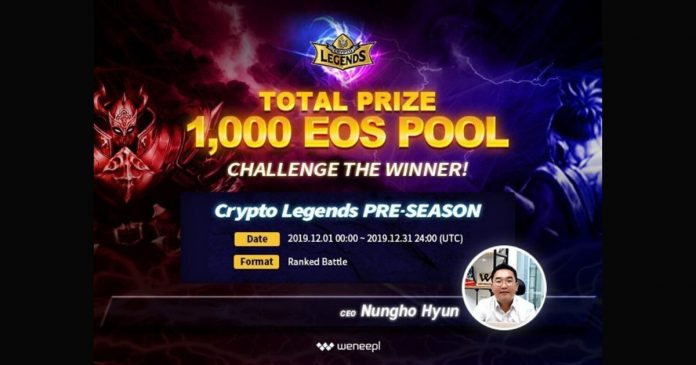 ShardTalk is the gaming interview segment of which connects our readers to people who are shaping the blockchain gaming space.

In this episode of ShardTalk, we look into one of the upcoming top games on EOS. It is our pleasure to talk to Nungho Hyun, CEO of Weneepl. He will share with us more on Crypto Legends.

Name: Crypto Legends
Genre: TCG
Quick Info: One of the blockchain games on mobile with the nicest graphics and gameplay. Ongoing partnership with Klaytn.

Q: What made you decide to make a game like Crypto Legends?

Nungho: We thought the key to blockchain technology was trust. The key value of the game, which incorporates the technology, is to provide users with “fun” and “reward” based on “trust.” Therefore, we introduced Crypto Legends which combines “fun” as a high-quality TCG and “reward” through its own card exchange and game league.

Q: How has EOS helped in the development of Crypto Legends?

Nungho: Prior to our entrance, a handful of blockchain games were already out in the EOS. In analyzing their games, we have come to think about ways to give more “fun” and “reward” to users. And technology such as data processing speed has also been an indirect help to our game.

Q: Crypto Legends is one of the best quality blockchain games on mobile I’ve seen so far. How long did it take to produce these kinds of results?

Nungho: First of all, thank you for your good assessment of Crypto Legends. Originally it was a mobile game but then we introduced blockchain. Therefore, the total development period took about two years.

Q: Which special features of Crypto Legends make it stand out?

Nungho: Crypto Legends is a great differentiator. It developed from the existing card-oriented TCG genre. The units belonging to each card were implemented in full 3D on the battlefield. NFT-based transactions, which are being used by traditional blockchain games, are also implemented within games rather than on external trading platforms, thus enhancing user convenience. In particular, through the e-sports regular league, which starts next year, users will be able to feel both the fun of competition and the rewards of prize money.

Q: What are some tips and combos you can share with your players?

Nungho: There are a total of eight classes in Crypto Legends, and it is important for users to select and intensively practice classes that suit their preferences. In particular, when constructing a card deck (Chapter 40), it’s better to have a lot of cards with low “Elixir” and special options at the beginning of the game. Also, there are three attributes in Unit Cards, a combination of cards that contain these attributes can have a powerful synergy effect. Of course, it’s better if you get a higher grade card and use it well.

Q: What are some of your favorite in-game cards?

Nungho: I mainly use Paladin, and I like Prism Gold Legendary Card. Its name is Mika the Legendary Paladin. The summon effect is excellent, and if I use this card in a disadvantageous situation later, it means I have the best card. At this time, the cool effect when summoned is a bonus.

Nungho: The rumor has it that the TCG genre is difficult. However, it’s not too tricky. There’s also a lot more variety of fun than just clicker games. The preseason league for prize money value 1,000 EOS is currently underway, and a regular league will be launched next year. Subscribers are also encouraged to enjoy the fun and rewards of high-quality blockchain games on Crypto Legends. We will repay users with better service. Thank you. 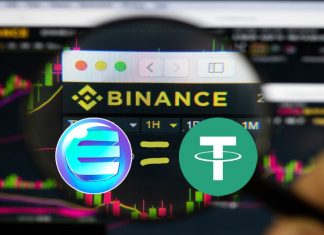 Robert Patrinjei - April 17, 2019 0
Today, Binance announced ENJ/USDT trading pair. That is a nifty feature to have since some traders may prefer trading with USDT instead of BTC...