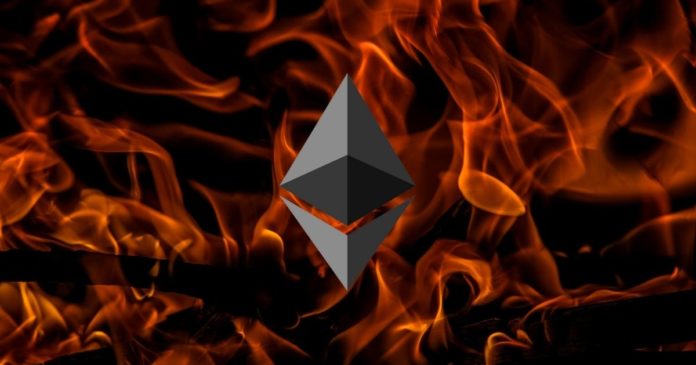 It has been less than a week since Ethereum’s London upgrade went live and already millions of dollars worth of ETH has been burnt.

The long-awaited Ethereum hard fork and EIP-1559 upgrade was deployed on August 5, just under a week ago. With it came the transaction fee calculation adjustment that resulted in a portion of those fees getting burnt.

According to tracking websites such as ultrasound.money, 26,300 ETH had been burnt so far at the time of writing. At current prices of around $3,200, that equates to $84 million in ETH up in smoke.

The tracker is reporting a burn rate of 3.16 ETH per minute. This is highly variable and depends on network load and demand – which is high at the moment.

Extrapolating this burn rate equates to around 4,550 ETH per day, and roughly 31,852 ETH per week. On a monthly basis, it would be around 138,000 ETH burnt. On a yearly basis, this could result in 1.65 million ETH being burned – or approximately $5.3 billion at current prices.

These figures are hypothetical and fluid as burn rates are constantly changing, however, what it does show is a snapshot of current conditions.

NFT fever appears to be dictating current demand for Ethereum as NFT marketplace OpenSea has become the leading consumer of gas. At the time of writing, it had burnt more than 1,300 ETH in fees, worth around $4.1 million. The Vox NFT collection was second with 665 ETH burnt according to the tracker.

There has also been a lot of talk in crypto circles about the economics of Ethereum becoming deflationary. This was not supposed to happen until “the merge” joins the current blockchain with the ETH 2.0 one and proof-of-work mining is phased out. This has been predicted for Q1, 2022.

However, there have been a couple of instances over the past 24 hours that have produced deflationary blocks. An ETH Burn Bot detected one instance where 945 tokens were burned within an hour. For that brief period, this was higher than the issuance of 528 ETH making the supply decrease a little temporarily.

The ultrasound.money fee burn tracker predicted that the supply of Ethereum will reach a peak of 119.3 million in early February 2022 before becoming deflationary.

The Ultimate Guide of Ternoa Blockchain

Deepika Garg - February 16, 2021 0
The Cloud has become our go-to space to upload our data with the assumption that it will be there forever. However, forever is a...

State of NFTs on Polygon