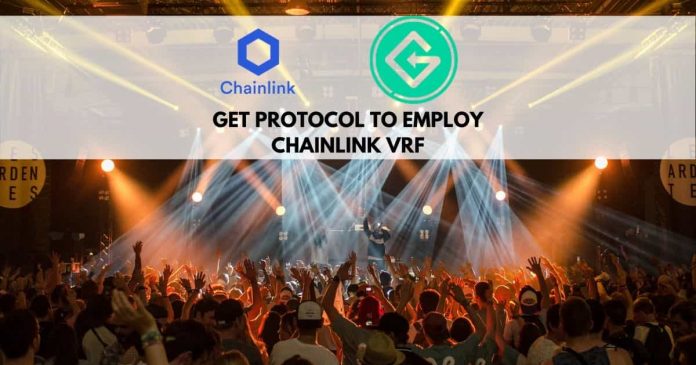 GET Protocol to utilize Chainlink Verifiable Randomness Function (VRF). This is done in order to carry out trustless and transparent ticketing services.

The blockchain-based smart ticketing solution GET Protocol disclosed that this integration with Chainlink VRF will further improve the transparency its platform is known for. Adding that now, its users numbering up to hundreds of thousands will be able to easily purchase smart blockchain-based tickets.

According to GET Protocol, the integration of Chainlink VRF will ensure ticket buyers have a fair chance of purchasing tickets. Simply put, it eliminates all forms of bias in the digital ticket waiting line. Notably, in the event of ticket demand being higher than supply, Chainlink VRF will randomly shuffle buyers given all a fair chance to get a ticket.

A huge advocate of decentralizing transparency, GET Protocol is one of the few cryptocurrency and blockchain projects with real-world use cases today. Since its inception, the smart ticketing solution has sold tickets for thousands of events. Thereby bringing blockchain technology to fans worldwide.

Each ticket comes with features like price and resale clauses as determined by the event organizers. Tickets are recorded on the Ethereum blockchain while GET token ensures the protocol operates seamlessly.

To prevent any form of malpractice, all tickets issued by GET Protocol are equipped with a unique QR code. The code changes every 15 seconds making it near impossible to be scalped. Notably, GET Protocol is yet to record not one report of a scalped ticket.

Known as a major force in the decentralized tech space, its oracles connects smart contracts with off-chain data feeds. Even more recently, the price reference feed company announced the launch of its Verifiable Randomness Function (VRF).

Chainlink in a blog post described its VRF as a security-sensitive standpoint that is needed by smart contracts. Developers employing randomness need to ensure that no form of manipulation exists. Chainlink VRF provides verifiable proof of its randomness which can be validated on-chain. Thereby ensuring not only secured randomness but trust from all parties involved. Though Chainlink VRF is still undergoing testing, pointers exist on how its operations will look like.

First, ticket buyers (frontend) will most likely see the digital waiting line. With Chainlink VRF they will also be able to “verify the randomization that has given them their place inline”.

However, the mechanism isn’t so simple on the back end.

First, interested ticket buyers join the digital queue, register themselves alongside a unique form of identification (most likely SMS).

Next, all IDs are transferred to a publicly accessible IPFS file. Once the number of fans in the digital queue exceeds the number of tickets available, the queue is shuffled. Thereby ensuring everyone in the queue has a fair chance of purchasing a ticket.

Then, when ticket sale-start is about to commence, GET Protocol hashes all the IDs to create a seed. The seed is sent to Chainlink VRF, which shuffles the IDs while also providing proof of randomness.

Lastly, fans in the queue are informed of their position. This process if necessary can be repeated until the event ticket is sold out.

While it seems GET Protocol is the major beneficiary of the integration, Chainlink VRF will also enjoy mainstream exposure.

CEO and co-founder of GET Protocol, Maarten Bloemers, pointed out that “blockchain is the future of the multi-billion dollar ticketing industry”. Adding that, it not only prevents fraud and scalping, it also provides much-needed transparency for the industry.

Bloemers further added that As a team “we are working hard to achieve our goal of becoming the worldwide standard for tickets-on-blockchain”. This integration definitely brings the ticketing giant a step closer to achieving its goal.