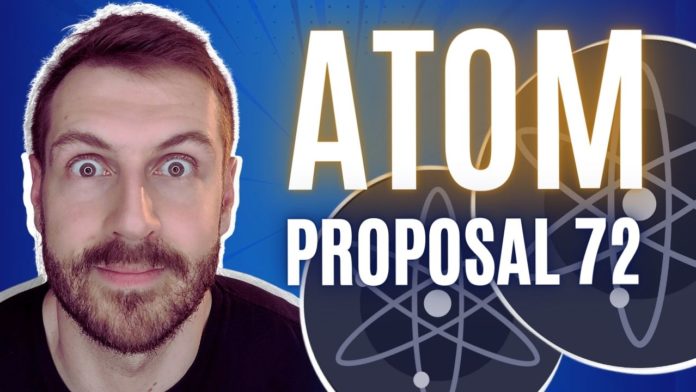 Cosmos is one of the industry’s success stories. So, cosmos chains have been tested with high volume, black swan events, and everything else we can think of and their blockchains just work the way they must.  That’s because Cosmos does a ton of things right and makes it easy for someone to build out their blockchain. And their services work great.

Even during the high traffic and unstable period of the LUNA/UST debacle, LUNA (built on Cosmos) never malfunctioned or was hacked, or faced any tech-related issue. They only stopped producing blocks when the developers at TerraForm Labs said to do so. Now a new proposal is set to take Cosmos in a new direction. Its Proposal 72!

What is Proposal 72 For Cosmos?

Cosmos is one of THE leaders in interoperability. If you are still not familiar with Cosmos or want a deep dive check out this video. Coming back to the present, Cosmos is now trying to improve its work within and between chains constantly and Proposal 72 is one of those major attempts to improve Cosmos and its ecosystem offerings.

The voting for the proposal closed a couple of hours back and the final verdict is in. The proposal passed with 85.38 % votes. 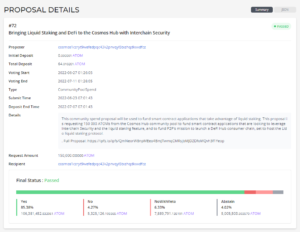 Now, we will see what improvements will bring to Cosmos:

The first major improvement is bringing liquid staking to the entire Cosmos ecosystem. Liquid staking has become an important development in DeFi and secured PoS networks. Investors are no longer satisfied with locking their coins in for a certain number of months or even years. They might for their single favorite project, but they won’t do it just for yield. Therefore, having a liquid component of either moving your coins around or getting a separate liquid staked token is not just attractive for investors. It’s a necessity.

It’s important to mention that liquid staking helped Lido’s Staked Ether (stETH) climb into the top 25 in market value in short order. Also, a couple of Cosmos chains have liquid staking, most notably Anchor on Terra Luna. But with this proposal, every chain built on Cosmos will be able to offer liquid staking.

Moreover, the new consumer chains will benefit by being able to work directly with P2P validators to develop those liquid staking capabilities.

After all, just because a validator believes in one Cosmos project doesn’t mean they believe in them all. This design maximizes flexibility and choice. Now with Interchain Security, it will be even better. The Cosmos Hub will now be able to let any of its 176 validators for its main chain also help secure other chains.

This means an independent chain built on Cosmos, like Secret Network, can use a combination of its own validators that like the project and Cosmos existing validators to help keep the project secure. Moreover, validators can secure multiple chains in a parallel environment. This is similar in design to Polkadot’s parachains. The name parachain stands for parallel operating chains.

There's been a lot of chatter about Cosmos Hub Proposal 72 in the past few days.

Voting on this proposal is active as of now and will end on 10th July.

Read on to understand the details of the proposal and the support & criticism around it 🧵 pic.twitter.com/r9zi62Megn

According to this FAQ published on HackMD, Lido and Quicksilver are intending to build out chains on Cosmos. P2P Validator is a contributor to Lido. This is no surprise to us as they are already familiar with one chain on Cosmos, having a Lido Staked version of Terra (now Terra Classic). On the other hand, Lido is more well known for its Staked Ether as we mentioned earlier, but they stake Polygon and Solana too. And there are a couple of others.

Since Lido’s product on Terra was successful, it’s natural they would go deeper into the Cosmos ecosystem and look to liquid stake other chains too.

Moreover, Quicksilver is already active on Cosmos as a liquid staking module. It’s sort of like an SDK but just for a chain to add liquid staking. Nothing else. Quicksilver has its own token too but they are still in testnet now.

This same Proposal 72 FAQ also says they expect many more chains to ‘lease their security from the Cosmos Hub by way of Interchain Security. Again, sounding like Polkadot with its 96-month leases of parachain slots.

Fees for all these services like the leasing of Interchain Security and fees from liquid staking are all paid in ATOM. It’s currently the #28 project by market value in crypto and trading at $9 each.

Its circulating supply is 292.5 million and the only thing we don’t like about the ATOM token is its potential unlimited supply. That said, ATOM and Cosmos are well managed. At the time of recording, ATOM is trading close to $8.11 and is 8.9% down in the last 7 days.

So that’s our look at the potentially impactful Proposal 72 on Cosmos, one of the most active blockchain ecosystems. Also, Cosmos has been tested in fast-growing bull markets, bear markets, crazy isolated events, and more, and their chains continue to operate as they should.

So, with liquid staking and Interchain Security added to the mix, if Prop 72 passes, it will only make building on Cosmos even more attractive. 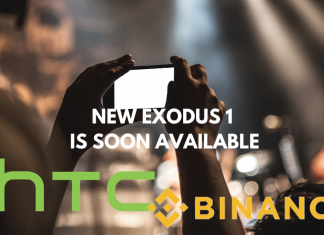 HTC and Binance are Offering You the Perks of a Blockchain-based...

Natalia - November 14, 2019 0
HTC is releasing a new version of the blockchain smartphone, Exodus 1. It will support Binance and is available for purchase soon. The company has...