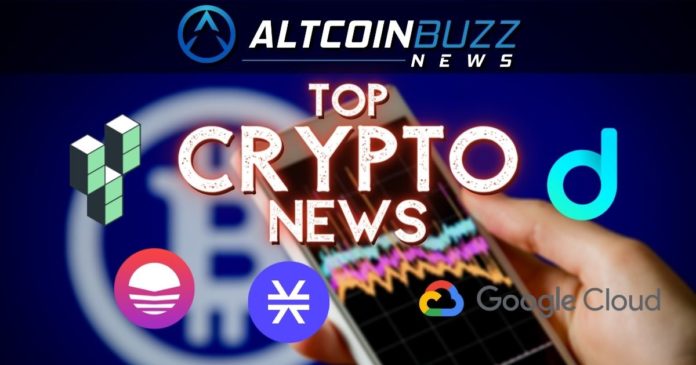 Let’s find out some interesting crypto news stories for the day in detail.

As per the tweet, this is a multi-year partnership that helps Google Cloud to serve as a network operator for the Flow blockchain. In turn, Flow developers would integrate their software with Google Cloud swiftly. Consequently, this would help Dapper to expand its operations through scalable and secure infrastructure provided by Google.

Amped to welcome Google to @flow_blockchain 🌊

In <1 year since #onFlow mainnet:

PlasmaFinance has declared its support in regards to EIP-1559 for easier gas fee management. As per the tweet, this integration helps users to enjoy fast transactions using the new gas fee settings. EIP-1559 is the latest upgrade for Ethereum’s market mechanisms to lower down transaction gas fees through Ethereum 2.0.

PlasmaPay is an application infrastructure that aims to decentralize the centralized financial services industry (CeFi). PlasmaFinance has designed its DEX token offering platform, PlasmaSwap, which will allow companies to launch tokens on multiple chains. Impressively, with this upgrade, users would send gas fees directly to the network, which empowers users to pay a fair amount of fee. Users can select a Standard, Fast, or Instant transaction as well as set a tip for miners.

🚀 #PlasmaFinance supports #EIP1559 now live on @ethereum in preparation for the much-anticipated #ETH 2.0
Now you can set the Miner Tips (priority fee) and TX Max Fee right from #PlasmaGasStation with precise accuracy and control the speed of your TX

Moonray is a 3rd-person action RPG set in a surreal sci-fi world. As stated, this is a play-to-earn model coming to the RPG market. Interestingly, this game is building on Bitcoin by Stacks. Moreover, Stacks is a layer-one blockchain protocol that brings smart contracts and decentralized applications (dApps) to the Bitcoin network. Hence, this innovation can uplift the gaming industry while attracting new gamers.

Moonray is building a full role-playing game where the scarcity of Bitcoin block space defines the land.

Built on Bitcoin through Stacks.pic.twitter.com/HHyrWbzAV6

Yield Protocol aims to simplify the investment process and maximizing user gains. While Chainport is one of the first permissionless bridges that provides an opportunity to interact with the dApps. With this integration, users can transfer $YIELD tokens between ETH and BSC through ChainPort. Additionally, this would open new markets for $YIELD tokens on decentralized exchanges (DEXes) on BSC.

Read how it all works in our Medium Article – https://t.co/MH8KIiqFaC pic.twitter.com/2cDfB4cRnj

In our last bit of crypto news for the day, we have DAFI Protocol reaching a major milestone by surpassing 100M $DAFI in TVL. Super Staking went live in June 2021 to provide lucrative rewards to stakers. Impressively, over 50 million DAFI tokens were locked in this Super Staking in just two weeks.

DAFI Protocol seeks to mitigate the concern of excess token supply, as well as other various issues faced by blockchain networks. Currently, 100 million $DAFI is worth over $5.6 million. This total represents more than 26% of the circulating supply locked by Dafinauts. Hence, this achievement would make the DAFI project stronger to boost its adoption.

Super Staking surpassed 100M $DAFI in TVL, worth roughly $5.6M. Now, more than 26% of the circulating supply is locked by Dafinauts.

Sebastian Ifversen - February 6, 2018 0
The biggest power utility company in Europe, Enel, has taken a stand against the energy consuming industry of mining cryptocurrencies. In a statement Thursday, the...