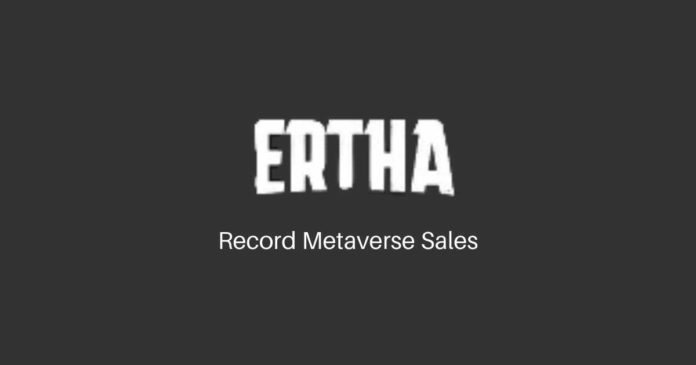 According to its developers, Ertha, one of the most popular crypto play-to-earn games, set a new sales record by selling the Rome NFT for $120,000. This achievement positions Ertha Metaverse to achieve its goal of becoming the industry’s leading metaverse.

Ertha Metaverse seems unstoppable on its way to becoming the industry’s leading metaverse. The project is already known for being one of the most-searched-for tokens in GameFi. It had a fully diluted market cap in excess of $380 million. Last week they announced that a new sales record had been set.

Rome no longer belongs to the Romans, but to the investor who spent $120,000 for the privilege to call one of Europe’s most famous cities their own 😍

Have you already got your piece of ERTHA?

The buyer who paid $120,000 for one of Europe’s most iconic cities, now owns Rome in the metaverse. The Rome NFT sale surpassed the previous highs of Tokyo and a large portion of Sweden, which went for $59,000 and $50,000, respectively. The anonymous user who bought the whole Rome NFT now controls sites such as the Colosseum, Trevi Fountain, Sistine Chapel, and Vatican City.

Those who own such pieces of metaverse land have the ability to create even more money from the virtual lands by using the features on them. The revenue is generated in the form of $ERTHA tokens. There are currently 360,000 pieces of land available for purchase. Each piece generates revenue through taxes, fees, and other forms of revenue generated by the transactions that occur on them.

When the play-to-earn game goes online, they expect thousands of players will join the plot and begin using it for various purposes. It will generate revenue for the buyer that significantly exceeds the purchase price. Lands from various new countries are constantly added to the marketplace, and prospective landowners can buy them.

Ertha is a virtual world game in which players attempt to correct the wrongs of existing political leaders. They can make decisions that contribute to a sustainable planet by owning lands and other assets. They also can:

In #Ertha every product in the game has a location 📍

It can be a player backpack 🎒, warehouse 🏭 or company 🏪

To stay ahead of the game, players must manage their production, trade, and finance budgets as nations compete for dominance, just as they do in real life. The $ERTHA token will power the game, influence in-game political policies, buy land, and develop real estate. However, every decision they make will have an impact on their influence in the metaverse, so they must carefully consider their decisions.
The $ERTHA token, at the time of writing, has a value of about $0.18. It is off about 60% from the ATH on January 4. That price was about $0.5. You can buy $ERTHA token at:

Martin Bilušić - November 10, 2021 0
You may have thought it was impossible to earn two types of tokens in one pool. Now it is possible. LuaSwap in collaboration with...