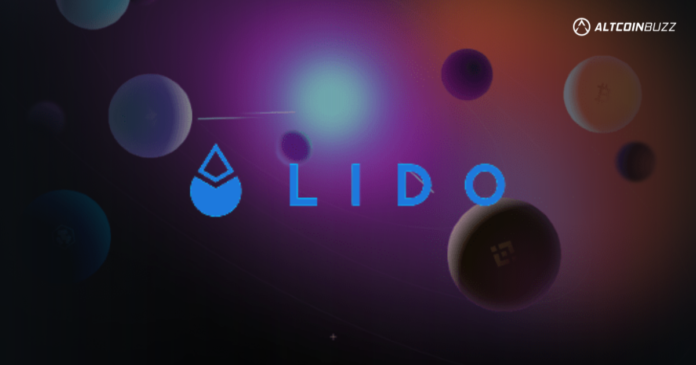 By now, most people in the crypto space know that Ethereum is about to change from PoW to PoS. The long-awaited Merge. This means that you can stake your ETH. Even before the Merge takes place. There are a few platforms that offer this service already. Lido Finance is the biggest among them.

Staking ETH is not that easy for a retail investor. It’s expensive and requires technical knowledge. However, Lido makes it easy to stake your ETH. So, let’s have a look at what Lido Finance is all about.

What Is Lido Finance?

Lido Finance offers liquid staking for ETH and a few other tokens. This means that for every ETH you stake on the Lido protocol, you receive 1 stETH. A tokenized version of staked Ether. In other words, it is a liquid token. You can now use these stETH tokens and earn passive income on DeFi platforms. There’s also no required lock-up period. Lido also doesn’t ask for a minimum staking amount.

This contrasts with staking ETH directly on Ethereum. Here, your ETH gets locked until the Merge. It also takes at least 32 ETH that you need to stake, to operate a node. Not to mention, that staking ETH is rather technical. Lido takes all these hurdles away. It lets you invest any amount of ETH you want, in an easy and non-technical way. Furthermore, stETH pegs 1:1 with ETH. Or at least, that’s the idea.

However, one problem is that stETH de-pegged from ETH. That was at the root of the issues for Celsius. On the other hand, it opens up delayed arbitrage opportunities. If you buy stETH now below the ETH price, you can swap each stETH back to 1 ETH after The Merge. So, it’s not classic arbitrage, which happens instantly.

What you need to keep in mind, is that you can’t get your ETH back, until The Merge happens. Once Ethereum puts transfers and smart contracts on the Ethereum 2 chain, you can swap your stETH back to ETH. The de-peg of UST also played a role, investors lost their trust quickly. They rushed to sell stETH. Finally, when investors started to take money off Celsius as a whole, Celsius couldn’t pay them. Because it had no access to its ETH, it’s locked away. They also couldn’t sell their stETH and what they could sell, they sold at a loss. There were other factors in play as well, but it shows what impact this de-peg had.

stETH has depegged to 0.97 stETH / 1 ETH … and seems intent on staying there. pic.twitter.com/PgmEl9bFWp

However, you do receive stETH once you start staking ETH on Lido. Now you can use this the same way as ETH. It allows you to take part in trading, lending, yield farming, etc. Furthermore, you stake your underlying asset and get yield for it. In the meantime, you also secure the network.

Lido launched back in December 2020. Shortly after the Beacon chain launched. We saw already that staking on Ethereum has a few hurdles. You need to stake at least 32 ETH, so your staked ETH gets locked away, and it requires technical know-how. The Lido DAO takes all these hurdles away. Here is an example of a voting process of the Lido DAO:

With the recent introduction of the Lido on Ethereum Scorecard – a set of attributes important for the decentralisation of Lido – we mentioned the importance of a vote timelock as a governance safeguard.

It’s time to bring this to life. https://t.co/buTB6RvHJT

Is the Lido DAO a Threat to Ethereum?

Danny Ryan thinks this causes a threat to the Ethereum blockchain. He is a researcher at the Ethereum Foundation. Ryan argues that Liquid staking derivatives (LSD) such as Lido should have no more than 25% of all staked coins. There’s a good article on this complicated matter, that explains this well.

In a nutshell, the cartelization of block space can happen. This is because Lido determines who can be a node operator. In the end, Lido can lead to a centralized attack on the network. This is because the lion’s share of staking power becomes too concentrated. A risk is that they can potentially interrupt the recording of new blocks.

In the Lido camp, they don’t necessarily agree with this view. Vasiliy Shapovalov, CTP at P2P, started a governance vote on Lido. The title “Should Lido consider self-limiting?”. The result, which came out on June 28th, 2022, showed that 99.81% cast a no vote. See the picture below:

We list the other tokens that you can currently stake on the Lido protocol below. These are the following chains are compatible with Lido:

Lido on Polkadot is here!https://t.co/gJh5AX3z6Z 🏝️

Stake your DOT with Lido for daily rewards and full control over your staked tokens. pic.twitter.com/VilI5dTsLd

The same liquid staking principle works for these tokens. Furthermore, there are 27 projects that are part of the greater Lido ecosystem. They either offer to stake at Lido or are in another way involved in the process. For example;

In this article, we don’t go all the way about explaining how to stake Lido. We cover the basics here and refer you to our Lido staking article for the full low down.

Staking on Lido is easy and convenient. You can stake any amount and in turn, you receive a derivative token like stSOL, stDOT, etc.

This reward token is what Lido calls ‘liquid staking‘. The current Lido APR is lower than Ethereum’s APR. It will also not exceed Ethereum’s APR, which currently is ~4.2%.

Lido Finance is taking up a key position in the crypto space. Somehow, they managed, almost under the shadow of the night, to reach the top 20 by market cap.

StETH also played an important role in the Celsius’s insolvency. However, some influential people, think that Lido might become a threat to Ethereum. For instance, Danny Ryan and Vitalik Buterin. Under certain circumstances, this can become a reality. So, Lido met already these circumstances, as explained in the Lido DAO section. It looks like both parties haven’t said the last word about this. Despite the DAO voting against a self-limit on the inbound stake flow.

⬆️ Win $6,699 worth of bonuses in the exclusive MEXC & Altcoin Buzz Giveaway! Find out more here.

Ruma - November 20, 2020 0
The Bancor Network is based on the Bancor Protocol that consists of a network of smart contracts, also known as “liquidity pools” in general,...