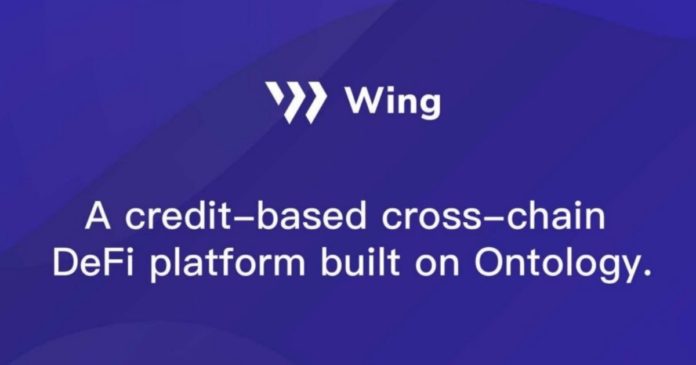 Built on Ontology, OScore is a self-sovereign reputation and credit evaluation system for the decentralized finance industry. It is supported using decentralized identifiers and verifiable credentials on the Ontology blockchain and supports cross-chain interactions across different blockchains.

Currently, OScore’s primary credit evaluation mechanism calculates the user’s balance and historical holding records of various digital assets. It supports blockchain platforms based on Bitcoin, Ethereum, and Ontology, and it automatically generates a quantifiable credit score for any user. During verification requests, the application takes the utmost care of the user’s privacy.

Thus, using OScore, Ontology is planning to provide a solution for users to bind an identity to their digital assets, which is missing from the current DeFi ecosystem. This will not only increase the trust and the security amongst the involved parties but will also take the DeFi ecosystem to the next level.

According to Li Jun, founder of Ontology, “Ontology is providing a solution that connects users’ assets to their identity, providing increased security and trust to all parties, connecting the missing pieces of the DeFi ecosystem.”

By using @OntologyNetwork's #OScore, risk experienced by lenders utilizing @Wing_Finance's #technology will be vastly reduced as #transparency and trust are greatly increased, and correct due diligence can take place. $ONT $ONG #DeID https://t.co/nPPqHaGFdU

The OScore system is planning to incorporate more on-chain data and evaluation mechanisms in the near future. Also, Ontology has already integrated OScore into the ONTO wallet. Users are able to manage their OScore through their mobile phones.

Credit-based DeFi refers to the emerging series of DeFi products that utilize an identity or credit factor component in its user flow. In the Wing Finance Inclusive Pool, users will receive the following benefits for maintaining a good credit score (OScore).

The Flash Pool was launched in early September. It allows users to lend, borrow, and earn interest from asset lending. The Flash Pool also contains an incentivized insurance pool to minimize the risk of asset loss. 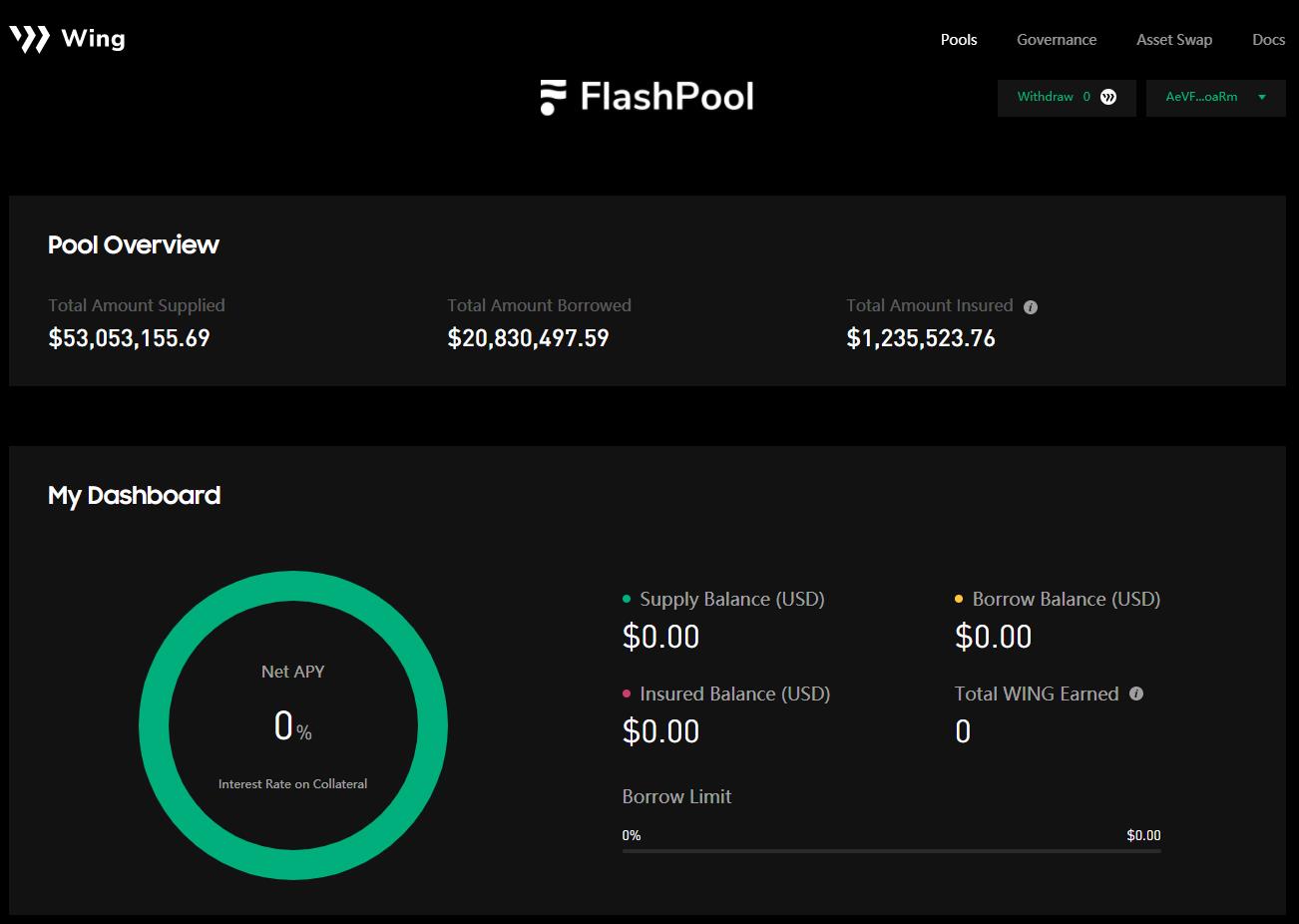 To learn more about the Flash Pool and how to Lend, Borrow, and insure, read the guide here.

Users can supply assets to the Flash Pool and earn interest as well as WING incentives from it. Users earn interest in the specific form of the supplied asset and receive incentives in WING tokens at the respective APY and WING APY.

Users can borrow assets from the Flash Pool if they have supplied collateral. The interest is charged in the same type of asset that the user has borrowed.

They can also earn WING incentives through borrowing in the Flash Pool, but for that, users need to mandatorily tick the check box to lock a 3% equivalent amount of WING tokens.

If you choose to lock the 3% WING requirement to earn WING on a borrow, then the amount of WING locked will automatically be displayed alongside the rest of your loan info.

In addition, you can liquidate the collateral of a breached user at a preferential price along with an estimated 8% liquidation bonus even if you didn’t participate in supplying, borrowing, or insuring.

Wing encourages the community to help refine a strong governance model and plans to transition into a fully Decentralized Autonomous Organization with time. The DAO community discusses, proposes, evaluates, and ultimately votes on policy, features, and more for the Wing platform.

Users can submit a proposal on gov.wing.finance to carry out actions such as: 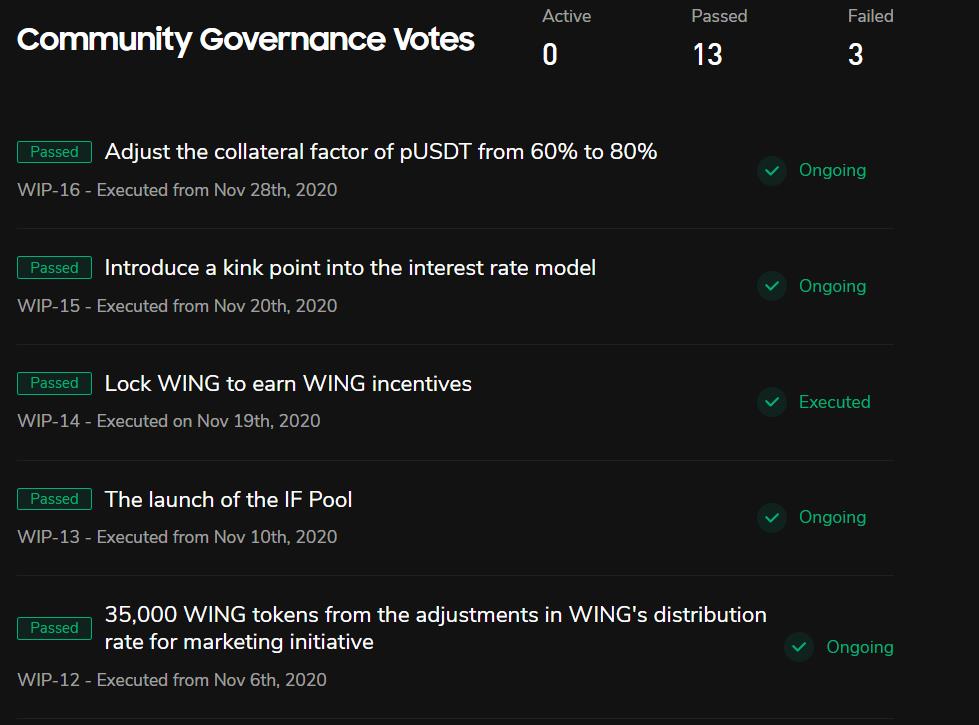 Based on the complexity of implementation, proposals are divided into three levels. These levels are defined and set by the Wing team.

Proposals can be implemented in three working days after the vote is passed. Level 1 proposals mainly include adjusting certain project parameters.

Proposals can be implemented within one month after the vote is passed. This includes, but is not limited to, the following:

Proposals that require more than one month to be implemented.

The WING token is the governance token of Wing DAO and the utility token for the Flash Pool.

As per WIP-8’s voting result, WING’s final total supply has been lowered to 5 million. To achieve this, WING’s distribution rate was adjusted to 60% and 500,000 WING tokens in the Community Fund were burned.

The total release will be completed over ten years.

Users can trade WING on Binance or on DEXs such as Uniswap and uTrade. 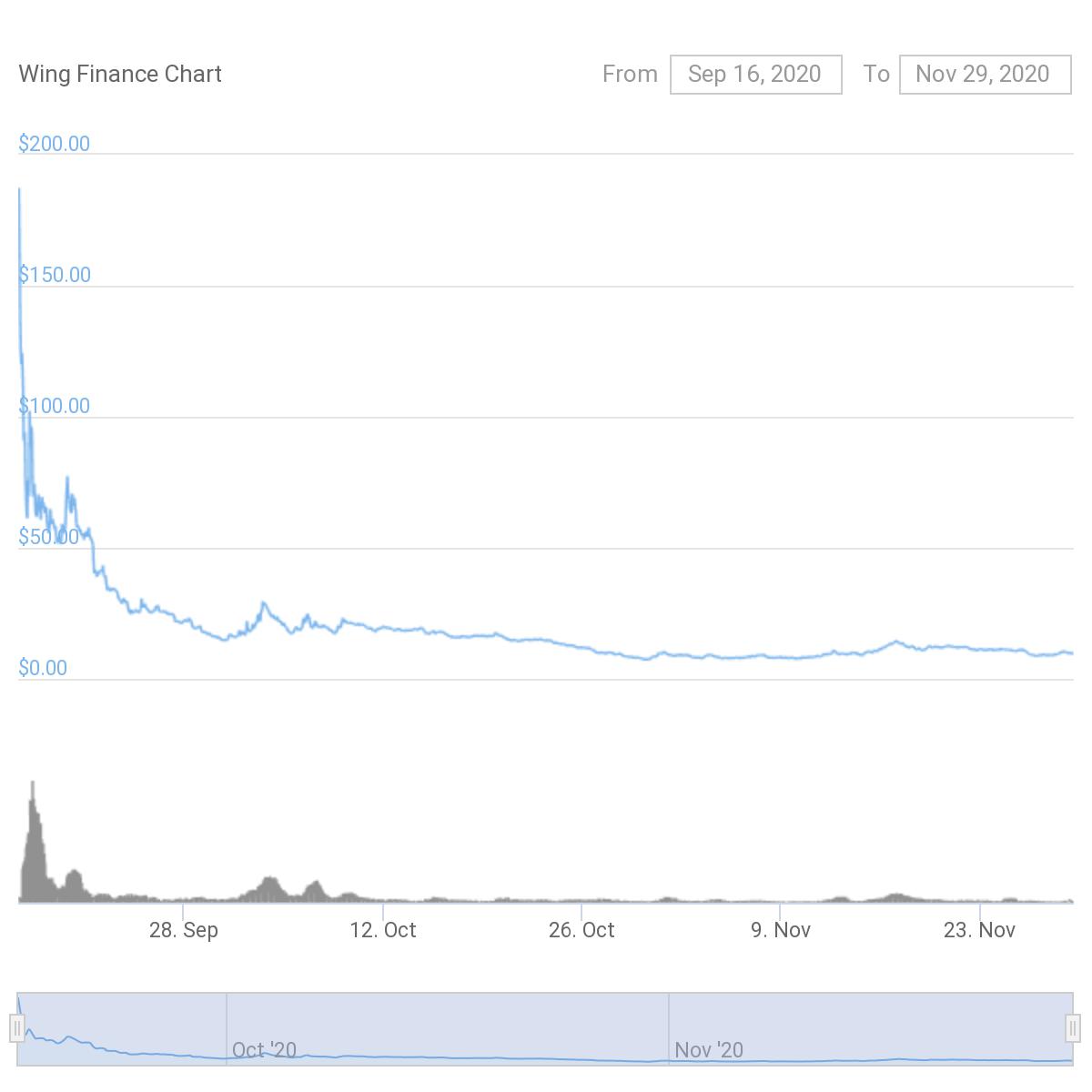 A credit-based, cross-chain DeFi lending platform is an innovative approach to offer more advanced solutions typically found in the mainstream financial sector. With this approach, Wing Finance aims to strengthen the capabilities, trust, and security among the parties involved. This not only helps users but it has the power to revolutionize the entire DeFi ecosystem. Built on Ontology, the platform charges a very low transaction fee, which is another advantage. It will attract more users once the platform starts supporting more tokens.

Read More: KyberSwap Wallet – How To Install and Use It 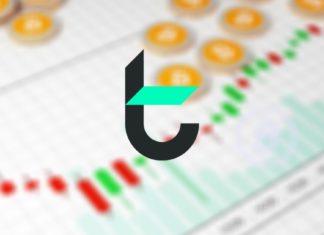 Pratik - January 18, 2021 0
Tomochain is a scalable smart contract platform which is powered by Proof of Stake voting consensus. Tomochain has planned Zorro upgrade and we will...